While Parker continues to deal with his cancer, other cats in the cosy apartment have been dealing with other issues. The last report I gave on Cammie stated that she was re-discovering the joys of soft-food, with the unexpected consumption of the rubbery Z/D tinned nutrition, and that she was less happy with being locked in the library while I was at work.

Things have progressed. Firstly, the princess continues to eat the Z/D tinned food. She prefers it to its hard counterpart, and she is rather rapidly going through the supply of tins that I have. I don’t begrudge her that. She enjoys this soft variety of the only food she can tolerate, and, while providing her with what she needs (granted, it is probably not healthy compared to what is available to cats without her allergy problems), it is giving her more moisture. Her kidneys still show borderline readings as to whether they are in failure, so all the fluids she can have are welcome. She also eats the hard-food, which is available to her during the day. 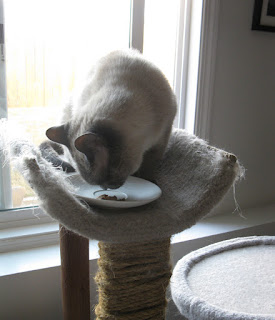 On that subject, Cammie’s days – at least those during which I am at work – are spent, not in the library, as originally attempted, but the bedroom. She clearly did not like being shut away in the library. I would collect her before I left and deposit her there, upon which she would promptly hide, and hiss at me from behind a bookcase. Furthermore, she continued to wet on the floor (actually, and thankfully, on the soaker-pad on top of the rug on top of the carpet on top of the floor) in front of the litter-box provided. She did not use the box at all. By the fourth morning of this routine, she was hiding before I sequestered her. She is better at hiding in inaccessible spots than I am at dislodging her.

Therefore, I tried the bedroom. The other cats there were evicted (though at that time of the morning, they are usually elsewhere) and Cammie, who is already present, locked up with hard-food, water and a litter-box. I suspect she disliked this option only a little less than being sealed up in the library. But her disapproval is not as obvious, certainly not as vocal. She has her favourite cat-tree in which to lie and gaze outside; she has the bed for snoozing (specifically, on or between the pillows), and the spot in which she had continued to wet is in another room.

I have tried the bedroom twice and neither time has she wet on the floor. (She has not been alone in urinating on that one spot in the library, and I have always suspected it to be due to an initial urination on unprotected carpet years ago.) She has in fact, not used the litter-box, either, but as she does what she needs to before I go to work, that does not concern me. She eats some food during the day, and is happier – or less grumpy – when released upon my return. So far, then, this new approach is a success.

Locking a cat away from the others for the day is always a cumbrous affair, and regrettable. But it provides Cammie with access to her food – and denies her access to food she shouldn’t have – while keeping the other cats from eating all of her food. It reduces stress between her and Raleigh, and, with luck – a lot of luck – it may break her habit of wetting inappropriately.

Since nothing this side of Heaven is perfect, I have found that imperfect solutions are perfectly feasible goals, and, once attained, are perfectly good, if small, victories. 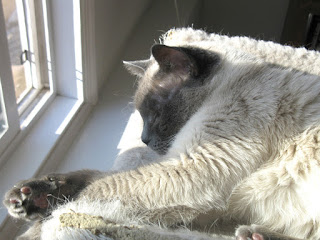