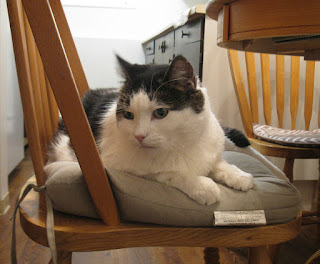 This weekend was not the carefree Utopia of joy and delight which I had hoped it would be. Saturday was acceptable, but Sunday turned bad.

Tucker ate this morning, but became hostile to food in the afternoon. He didn’t show up at the table to accompany (ie. watch) me while I ate dinner, which was quite out of character. Since then, he has thrown up several times.

Raleigh too ceased eating, though his avoidance began this morning. This was paired with what seemed to be a great fear of me, running from me and hiding. Food consumption is important to him in a way it is not to some others in that he must have his Prednisolone each day.

Worst of all, Parker has eaten only a few tiny pieces of chicken all day, and these he later threw up. For the last three working-days of the week, I had come home to a generous amount of regurgitation somewhere on the floor. I suspected that it had come from my orange-boy, and I was proved right today. What he has eaten in the evenings has usually stayed down, but he wanted to eat nothing tonight, despite the wide variety offered to him.

It is nearly bed-time as I write this and things have improved a little. Peachy ate a decent amount of food at snack-time, and I was able to introduce his Prednisolone into the soft-food then. He ate it all, thank goodness. Tucker will receive a dose of slippery elm before bed; I hope that will settle his stomach somewhat.

Parker, however, remains obdurate, and will not eat. His spirit, remarkably, is high. He and I had a good petting session this evening. I sat on the floor with him, and he purred his loud purr as he continually pushed his head against my hands and legs. But each time he was offered food, he seemed to consider it for several seconds, and then reject it. More chicken will be cut up and heated tomorrow (the immediacy of the warm, juicy meat seemed to appeal to him today), and other tinned foods will be tried. I know my sturdy-boy’s time must come, and likely soon, but I keep hoping it will be at some indefinite future point. Now seems far too soon.
Posted by John Bellen at 8:31 PM