Parker continues to do relatively well. There is a new development, which may be related to his cancer. A patch of hairlessness has appeared on his right shoulder. He has been licking at it, so I am not sure if that action caused the hairlessness or if it is in reaction to it. In any case, licking it is making it worse. I suspect that it is connected somehow to his ailment, in the same way that his nose has lost its hair. It may not be a coincidence that, despite his good hygiene elsewhere (eg. washing most of his face, cleaning his paws), Parker doesn’t clean his nose of food after he eats. Perhaps he has no feeling there anymore.

But, in terms of what could occur, hairless spots and obsessive licking are not the worst, and my orange boy is still eating very well. I remember writing to a friend in January that my foster-cat was not consuming much at all. How that has changed. I am certain that his appetite has contributed to his extended life-span.

Also contributory, I think, are his excursions outside. For the most part, they are enjoyable. He loves the feel of the air on his furs, and the smells that come to him on the breezes. He likes meeting people; when he sees one approaching, he will walk toward him, ready to make a new friend. There are exceptions to our good walks. Yesterday, I made the mistake of feeding him luncheon before the walk, rather than after. I am certain that this caused his desire to do nothing but lie down on the sidewalk, and become fractious at the notion of doing any walking. I won’t make that scheduling mistake again.

But by and large, Parker’s walks are a source of strength to him. Like Antaeus the giant, from Greek mythology, who derived power from his mother, the Earth, whenever in combat he fell, so too is my little Antaeus sustained by our version of nature. Time in the open air, whether warmed by the sun or dampened by the mist, invigorates Parker, and is one of his secrets of immortality – or at least a touch of it. 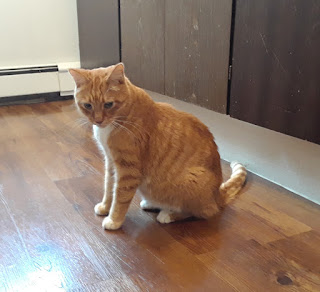