Tucker is on a new regimen. He always seems to be the subject of some sort of experiment. Last Wednesday, I collected from the veterinary some Mirtazapine, to stimulate Tucker’s appetite, and some Aventi, used as a phosphorus-binder in cats with bad kidney issues. Unfortunately, neither is working as I had hoped.

I was told that the Aventi, which is in powder form, has no taste and would not be noticed by a cat if the powder were sprinkled over his food. I was, of course, dubious of this, and, it turns out, with good reason. Whether or not he can taste it, Tucker does not look with favour upon this grayish-brown powder on or in his food. I had hoped that the appetite-stimulant would cause him to eat more, and thus I could hide the Aventi in a large enough amount of soft-food as to be unnoticeable. But, except on the evening of the first day the Mirtazapine was administered, almost too soon for it to have been from its effects, Tucker’s appetite has not increased all that much.

The renal-specific food from the veterinary hospital was, needless to write, a bust. Tucker wanted nothing to do with any of the half-dozen varieties I bought at inflated cost. Raleigh generously took it upon himself to finish off a couple of tins of it, but that, of course, doesn’t help the situation. Using on-line resources, specifically Tanya's Comprehensive Guide to Feline Chronic Kidney Disease, I am researching alternatives. The key is to find food that provides a phosphorus content of less than half a per cent. No commercial food qualifies, however, and no food that does (ie. veterinary food) appeals to Tucker. The matter is complicated by his diabetic need to keep carbohydrate-consumption low. The inescapable truth is that I will likely have to feed him the most innocuous food, despite its higher phosphorus content, just so that he will eat. I will then supplement it with unconventional food that he will like – cooked eggs are an example.

My poor sausage of a cat has had more things wrong with him than all my others combined, I think. I sometimes am reminded of reading about an old house that had been so pulled around by renovations and repairs, additions and demolitions that it was falling apart. Through it all, though, Tucker has maintained his happy attitude. He purrs easily and is never sullen. He puts up with much and tries to smile through it. He is the least combatant-like cat I have met, except perhaps Raleigh, yet Tucker has battled more than most. I am confident that he will win this battle, too. 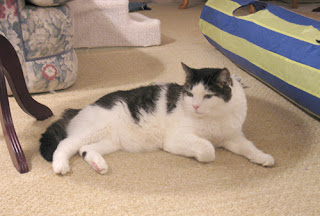