In what appears to have been a deliberate and targeted crime, Café Cosy was robbed and vandalised, Friday night.

Owner John Bellen states that he was relaxing in his bedroom about eleven o’clock when he heard a commotion.

“I was relaxing in my bedroom about eleven o’clock when I heard a commotion.”

Initially, alerted by the sound of something fragile breaking, Bellen thought its origin was across the alley, in a neighbouring yard. A second crash was clearly from nearer by. It came from the concrete ditch outside the sliding glass door of Bellen’s sitting room, adjacent to Café Cosy’s dining room.

“Someone was smashing the dishes I had there for the use of patrons.”

Thinking that he had human violence with which to contend, Bellen was relieved – and not very surprised – when he turned on the light to illuminate the restaurant and found a gang of robbers at work. 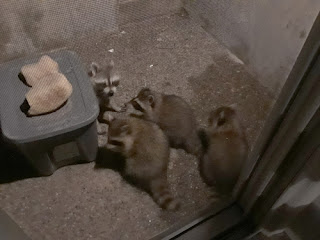 The gang appears to comprise a parent and her three juvenile children. Bellen stated that they may be related to suspects who had visited his café last year, but it was difficult to tell, as in both cases the burglars were masked. 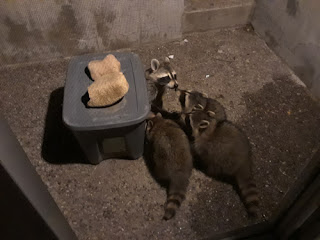 “To be honest,” he said, “I don’t mind them helping themselves to the food. The Café Cosy is open twenty-four hours a day, and we don’t discriminate among customers. We are happy to serve cats, sea gulls, magpies; we’ve even entertained skunks in the past. But some patrons can become rowdy.”

Damage was not extensive, principally a soft-food bowl and a heavy glass water-bowl, the latter not easy to replace. The debris was cleaned up the following morning, and the restaurant open for business as usual.

Police are interested in questioning a female raccoon and her children. Charges may include theft under $25, contributing to the delinquency of minors, malicious damage and gluttony.

It is disheartening, Bellen reported, that the incident occurred despite the employment of new security staff, who were on duty at the time. 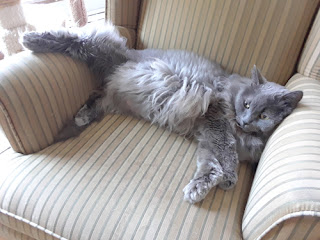