His Spirit of Adventure

Tucker evidently thought that if an old lady could do it, a baby-faced middle-aged mancat could do it.

My roly poly (who is, in fact, just a year younger than Josie), has decided that he, too, would like to journey beyond the apartment’s front door. This started last week, and, frankly, surprised me. Tucker has always been very timid of the world beyond the cosy apartment. Over the last year or two, however, he has become much more outgoing with visitors, when we have them; the fact that they are a rarity makes his friendliness toward them more surprising. He used to hide from guests. Now he stays to rub up against them and purr.

So it is that he has begun to think outside the apartment, as well. One day, he simply invited himself to go past the door while I was coming in. I am always wary of the cats doing this, even if I think they never will, so Tucker did not make it past the threshold. But on later occasions, I permitted him to explore, and he has, to a very limited extent.

He is much more ready to hurry back to the apartment than is Josie, and it takes only a mild, brief sound from me to make him turn and scurry away from wherever it is I don’t want him to be. Nonetheless, I keep a close eye on his ramblings and am always ready to grab him, if need be.

But he is content to sniff and look at this strange world, hearing noises from unexplained origins, and watching people - from a distance - whom he doesn’t know. It is a strange change of behaviour for a cat who still has little interest in what is beyond a window, barring the odd raucous magpie. I am hesitant to smother any curiosity, however, as what stimulates my beasts is always in low supply. If the smells of a well-trodden carpet and hints of what lie behind others’ doors intrigue one or two of them, I won’t stifle their spirit of adventure. 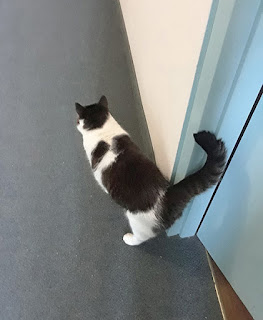 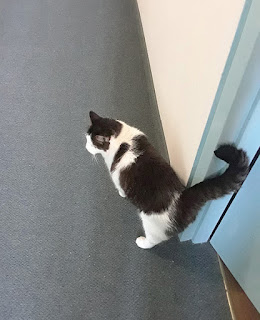 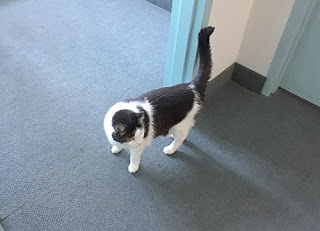 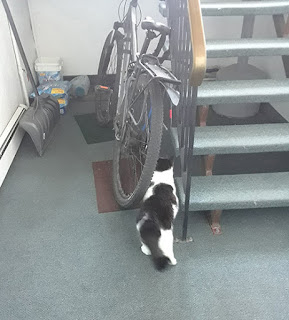