This is Shasta. He’s the second of the four kittens I have to capture at my work-place. He fancied some sardines for breakfast, but realised he was trapped before he ate. Much more exuberant in his efforts to escape than was his sister, Fanta, he is calm now and awaiting his fate, which, I hope, will be a neutering today. (I am guessing that he is a boy.) 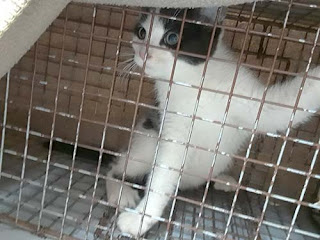 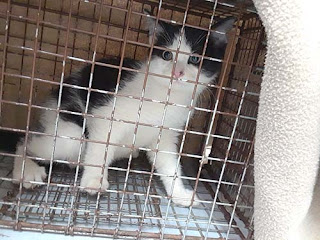 After two days of heavy, uncharacteristic rain in our part of the country, and then the Canada Day holiday, I was hoping for some luck with trapping. Shasta has provided it. There are two more little ones to catch, and two adults. I don’t know how fortune will smile upon me with the adults, but the kittens are a grey one and a fourth who is either grey-and-black or white-and-black. Either way, the little black dot on Shasta’s nose should differentiate him from a similarly-hued sibling.

This is a good start to July.
Posted by John Bellen at 6:45 AM