A Big Noise in the Small Room

Every cat has his own routine when visiting the litter-box. From where they derive their various habits is largely a mystery. I recall my Cammie would scrape at the inside walls of the hooded box, as if trying to bring down the sides of a tunnel in the dirt. Sometimes, a cat will alter his pattern, do something different, something without precedent, which creates an even bigger mystery.

A couple of months ago, Neville started to bang the insides of the litter-boxes. It is so loud and hard, I liken it to someone beating on the plastic boxes with a mallet. It is as though a fight had developed in the box, or a noisy protest against a lack of proper facilities. Maybe Nev is re-enacting a scene from Voyage to the Bottom of the Sea, with the crew members being flung from one side of a room to the other by external disturbances.

The only explanation I can conceive for this new behaviour is that the Nevsky, with his long fur, will sometimes suffer from unwelcome debris, clinging to his nether regions. It may be that he has devised what he believes is a means of dislodging such inconveniences. I have never seen him in the act of hammering on the inside of the litter-boxes, so I cannot vouch for what part of his body creates the noise. In fact, I cannot determine whether it is done after number one or number two, or both.

In any case, this new action leaves little more mess than any of his previous. Nor does he do it in the wee hours of the morning. So, if it is a better means of coping with what needs to be done, I will not discourage him. Yet the mystery for me remains. 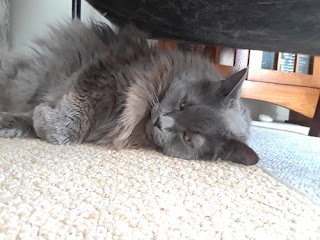