The New Boy So Far

Hector is turning out to be a fun little guy. He’s very energetic and playful. Though I think his chasing of Neville is deplored sometimes by the latter, I don’t believe it is always unwelcome. I’ve watched them run and Neville’s is not always the hectic attempt to escape something dangerous. There may be an element of play in their interaction. Certainly when the Nevsky lies on the floor near the mouth of the nylon tunnel, in which little Turk is hiding, it is not a sign that the older fellow is demanding distance from the younger.

Hec’s soaking of the floors is abating a little. I am looking for the right tray or pan on which to place his water-bowl but, in the meantime, have noticed the newcomer’s splashing has diminished somewhat. That doesn’t mean he won’t get into trouble. He will go anywhere in search of the unknown. Actually, he will go anywhere in search of soft-food. If that takes him into the unknown, so be it. 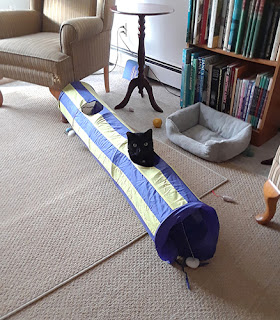 He has had no difficulty becoming an indoor-cat. He has seen me at the door to the concrete ditch and has shown no desire to be outside. I am careful in opening doors around him, of course, but he seems happy to be inside. He is more curious of what lies beyond the door to the corridor outside the apartment but, then, that looks like a door to yet another, unexplored room of his new home, so different rules apply. But he is content to spend quiet times curled in the cylinder-house cat-tree, or lying stretched out on the heated towel in the library.

That doesn’t mean he is sedentary. He will decide to zoom through the rooms without warning, and seems especially to like starting suddenly from surfaces that shoot out from under him: a box lid, or a rug on smooth flooring.

He is an intelligent boy. He knows his new name, and the meanings of “dinner” and “snack”. He has learned quickly how to use the stairs by the bed; he also knows he’s not allowed on the kitchen counters, though this means little in practical terms… 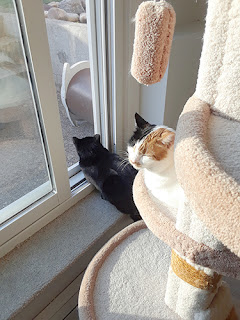 He is most amenable to being picked up, and petted, and is partial to gentle head-rubs. He will grab my hand or fingers to bite them if annoyed with my actions but doesn’t follow through; it’s a protest, not an assault, and he responds immediately to an admonition of “uh-uh” if I feel he is too rough.

Hector is the most immediately-adoptable foster-cat I’ve had, I think, even more so than Xanadu, who was too much of a good thing, if you understand. (The X-man has settled very nicely in his new home and complements his feline siblings perfectly.) Hec is of course welcome to stay in the Cosy Apartment as long as he needs to, but with so many good qualities, it would be a shame not to see this youngster in a home with another playful cat or two, and a family of attentive and loving humans. 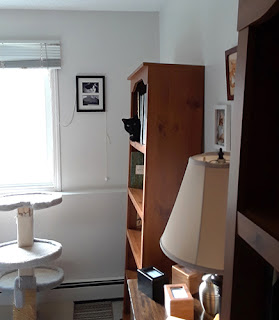