I think I’ve discovered one of the reasons why any bowl from which Hector drinks water is emptied of its contents and, sometimes, pulled half-way across a room.

I watched this weekend while the little fellow went to a water-bowl to quench a thirst. A first, he drank from it as most animals do. Then he sat up and started pounding the water with a paw. Water flew everywhere; he also struck the edge of the bowl several times. After this, he licked his paw until, I assume, all the water was removed. 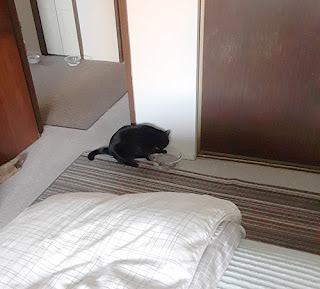 Certainly, some cats will drink by dipping a paw into the water and licking the moisture from their fur. Portia does that. But to soak a paw entirely by slapping the water is new to me. Perhaps it’s a remnant of Hector’s outsider-days, when he sometimes drank from puddles (if he did).

I will be buying a different bowl for the library, where Hec drinks - and spills - most of his water. I intend for a heavily-bottomed, broad and shallow bowl. This won’t prevent him from throwing water about, but should reduce the tipping and dragging that produces most of the fugitive liquid. After that, we’ll see what we can do about the splashing. 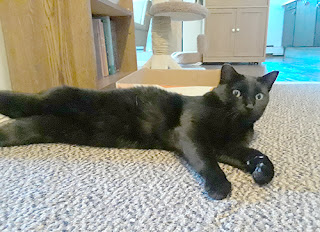