Hector is slowly worming his way into the population of the Cosy Apartment. To watch him, you wouldn’t think there is anything subtle about him. Last night, however, I was at my desk and Hec came into the bedroom. He climbed the stairs to the bed and, as he does, stopped on the top step. I urged him to come forward; I thought he would cross the bed, walk across my desk and continue to the ledge under the window, as he has done before. Instead, he slowly settled himself next the pillow. Both Renn and Tucker were snoozing on the bed. Renn ignored the little Turk for a while, then left for the cat-tree. Tucker woke, stared at Hec a minute, then, with my encouragement, set his head down again and closed his eyes.

From now on, I think it will be just a matter of the perma-cats getting used to Hector. They know his behaviours; they are beginning to understand that his charges are attempts at play, rather than intimidation (which they may have been originally). This realisation doesn’t mean they approve of such actions, but they are growing accustomed to them. I think that will be the pattern in any home to which the new boy may go in the future. He would benefit greatly from a friend a year or two older than himself, a playmate, but also a slightly more mature mentor, to teach him what to do.

Until then, he will have to settle for learning from my lot what not to do. 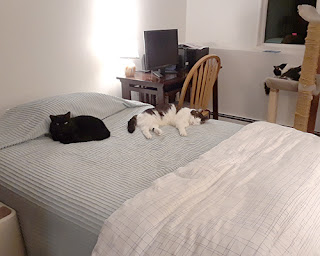