I started out, as many do, with one cat, Tungsten. A year and a half later, I added Josie to the family. Another year and a half passed before I brought in Renn, and very soon after that, Tucker.

Though they did not all join me together, I have always thought of these cats as my originals, the First Four. I don’t know why, since it took three years, from 2007 to 2010, to assemble the group, and I had foster-cats between their arrivals. But this quartet were my Old Guard. I wrote about them as such last year, in September, when three remained, and they seemed relatively healthy.

Tungsten died in 2015, and Josie passed away just this year. My remaining veterans have aged rapidly, it seems. Renn clearly is not as strong as he once was, and the black in his coat is shot with white. Tucker is battling diabetes and kidney failure; his eye-sight is failing and his hearing is dulled. His skin hangs on him like a great warrior’s armour on a child. And, of course, he is toothless. (“I haf no teef!”, as the once-roly poly himself might say.)

Though they barely play now, and their appetites are irregular, yet they manage to jump from the bed to the cat-trees in the bedroom. While they sleep most of their days and nights, yet they rouse themselves to indignation at the intrusion of young and impudent new cats. Renn remains my big boy, and Tucker continues to purr more than all the other cats combined.

When the last of the veterans passes, things won’t be the same in the Cosy Apartment. Like a new levy of soldiers recruited after battle is joined, those who follow will not have the same experiences, the same familiarity with this little world in which they will live. The newcomers’ bond may be fast, but it will not be that which joined the First Four together.

Nonetheless, though they have suffered casualties, and their numbers are diminished, the Old Guard still stands. In my heart they always will. 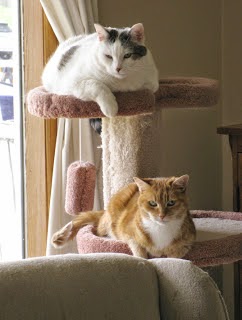 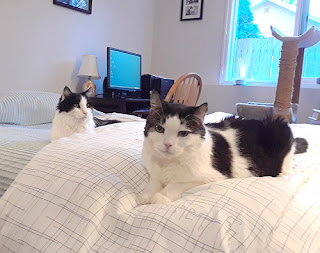