At the risk of provoking the wrath of the universe, I must state that Hector’s integration has probably been the best I’ve experienced. There is certainly some distance to go: he sometimes growls at the perma-cats even when there are six feet between them, and will periodically chase them, probably as a kind of pre-emptive action. The others will hiss and growl at him, too.

But these instances are not as frequent or as strong as they could be. Furthermore, they are balanced by positive developments. Portia continues to reclaim the library for all the beasts: I saw her lying on the short bookcase under the window, gazing out, as she used to do. And then there was this, last night. 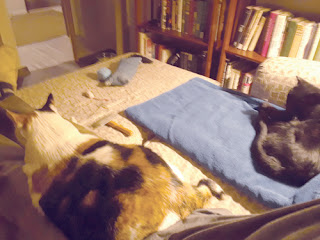 The picture is off-centre and blurry, but it was hard to encompass both cats when I had to hold the telephone so far up and away that I couldn’t see the image it was recording. Portia had been in the corridor again, and I suggested that she come into the library and lie on my lap. She was pleased to do so and spent some minutes there, purring and being brushed. Then, Hector came in. I encouraged him to jump up to the couch, too, and he did, settling on to the heated towel at the other end. Not being a long couch, the two cats were only a couple of feet apart. Portia remained on my lap purring, and Hec was content in his corner, also receiving pets. They only moved about a quarter-hour later when a noise outside sent them to different windows to investigate.

I would like to allow Hector out of the library all day while I am gone. I think the beasts will regulate themselves adequately, if not perfectly. I will need to devise a way of keeping the soft-food I leave out for the others out of Hector’s always-hungry maw, but that is a minor problem. The major one seems to be on its way to solving itself.