A Busy and Successful Day

Well! It was a busy and successful day at the Cosy Apartment.

It was shaving day for two of the beasts. Minuet’s coat is of dry, coarse hair, and was full of mats; so many, and so close to the skin, in some cases, that combing, or cutting with scissors, were impractical. Neville too suffers from mats. His long, thick hair is not impossible to comb and brush, and the mats not impervious to snipping, but he dislikes both remedies, so it was decided to shave him, as well. A very good friend of the rescue-group was asked to shave the cats; this friend is excellent with trimmers, quick but careful, and she agreed cheerfully to do the job.

Two other ladies from the rescue-group came to help, as shaving cats is sometimes a multi-person job. However, we were all very surprised at how docile both Min and Nev were during their ordeals. Minuet protested verbally toward the end of her shave, particularly as that involved her farther regions, but only objected physically when she had to be held up for a tummy trim. Neville, whom I expected to put up a struggle – though not a violent one – barely resisted. Consequently, the shaves were close and neat and complete. 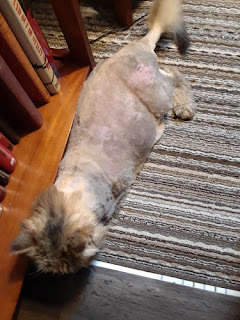 Minuet’s shave exposed some old scars. Her previous owner had told us that Min had been badly shaved before, to the point of the trimmers cutting into her skin, an injury which later caused infection. These are the marks that may look like wounds in her photographs. They have healed but I can’t help wondering at her docility during this new shave, considering what had occurred under inept hands in the past. 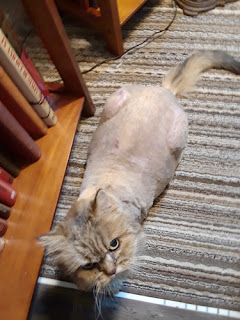 Madame will wear a sweater until her fur grows back. The one she has now is rather too large for her, so I will try to buy a better one tomorrow. For now, though, blue is her colour. 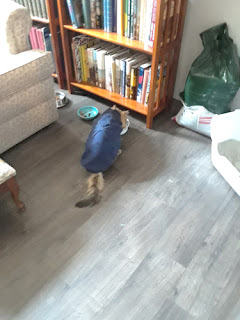 Neville, being younger (he is but middle aged by my reckoning; senior by any veterinary’s), won’t require a sweater. He has a history of eschewing warm spots, anyway, though he has favoured snug cat-beds periodically. Both cats have been provided with heated beds. Minuet has already spent some time on hers. 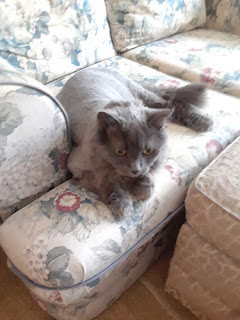 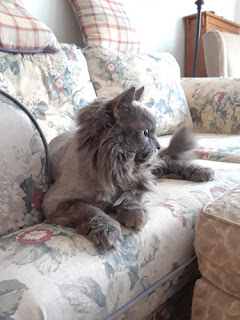 A minor miracle transpired after Minuet’s shave. In the two weeks that she has had her new cat-tree, Madame has disdained its full utility. She has used it, but only because it was unavoidable. Prior to its arrival, she would ascend to the carpetted top of the library’s lower bookcase by scrabbling up the back of the couch, and then pulling herself up to the bookcase’s top. This arduous climb was why I had the cat-tree made. With its placement between the couch and the bookcase, she has had no option but to use it. But she used only a couple of its steps: those that intervened between the back of the couch and the lower bookcase. I had been thinking those must be the most expensive couple of steps ever purchased for a cat.

But immediately after her shave, Minuet, wearing her sweater, climbed the cat-tree, from the floor to the bookcase, slowly stepping from one platform to the other. I couldn’t believe my eyes. But I had to credit my sight when I observed her later climb down the same way. It was one of those changes in feline behaviour that seems so casually performed as if to intimate that there had never been any other way of doing it. 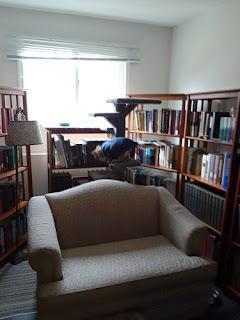 She may not resort to the cat-tree every time; I suspect she will. It surely must be easier on her old bones than her prior method. The question in my mind is not whether the action will be repeated, but why it was done now. Is it merely a coincidence that it followed immediately upon a shave, or had the mats been so debilitating that they prevented her from climbing the tree? This possibility seems unlikely, since she has been agile enough to achieve her purpose in other ways. Nonetheless, I am quite pleased. It’s like seeing a cat play with the actual toy one has bought for it, rather than the box in which it came. 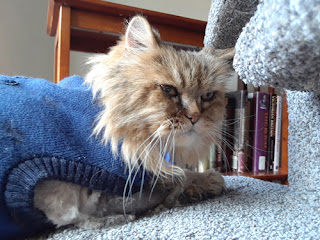