He Should Be Called Visa

Hector has not been as seriously affected as I had feared by Auric’s move to a new home. He does not seem more bored by his lack of a playmate – though I am sure he is feeling Auric’s absence – and keeps himself occupied by running about, annoying Renn and Neville and watching Minuet more.

He also has attached himself more firmly, or perhaps just more often, to me. He always liked to rub up against me, and spend time where I was. Now, it happens more frequently, and he follows me on a number of my chores.

The trouble with that is that Hector’s shadowing has a time-lag to it. When I walk to the right, he follows, but late enough still to be going right when I turn left. He will follow closely enough so that there is no room for moving to one side or the other without first bumping into him. And preparing something in the kitchen usually involves gently moving a horizontal black cat aside with my foot, as if he were a furry broom-head.

These characteristics are more pronounced when I need to do something. It’s as if Hec feels he needs to accompany me in ‘real-time’, as it were, but lacks the foresight to know precisely what I intend to do from second to second. He becomes, therefore, an impediment.

I know this is a temporary trait, but for right now, I feel like he should be called Visa, because he’s “everywhere I want to be.” 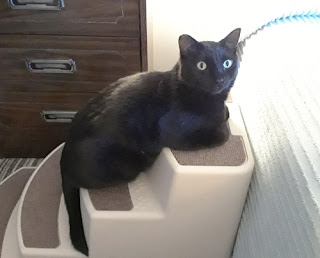