The shaving of Minuet and Neville appear to have been good moves, especially for Madame. As a couple of readers have commented, knots and mats, particularly on the legs, or under them, can inhibit movement, perhaps even by causing pain. As mentioned in the previous bog-entry, before Sunday, Minuet accessed her new cat-tree by the back of the library’s couch. Though she still does, if she is in front of the couch, she just as often climbs from the floor up. She has rested on the very top platform - something new just this morning - and will lie on one of the upper levels and watch passers-by through the library’s open door. 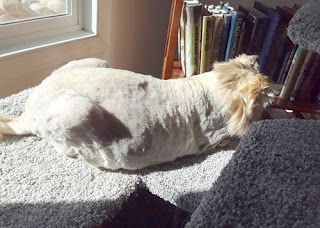 In response to her new lack of insulation, I initially tried a sweater, which Min tolerated. But it didn’t survive the night. She shed it some time before Monday morning and wet on it. I think the latter was accidental, as it was probably not completely off of her when she used the litter-boxes; there was no urine on the floor. A second shirt was wrapped around her waist when I returned from work yesterday. The trouble is that these are dog-garments; cat-sweaters are impossible to come by, and dog-sweaters are made for different anatomies. I could probably send for something on the internet, but buying clothes - for man or beast - without being able to try them on is fraught with hazards and, later, unsuccessful attempts to return the items. 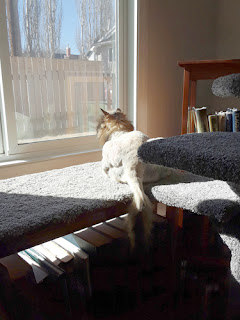 However, Minuet has her heated bed, which she has been using, and I will be getting her a space-heater to warm the room in general. But this morning when the apartment would have been at its coolest, I found Min on top of the bookcase, looking out the window, so she wasn’t cold enough to resort to her bed. And during the afternoon and early evening, the sun has returned its rays to the apartment. Even so, I will be accommodating her age and lack of hair with extra heat. 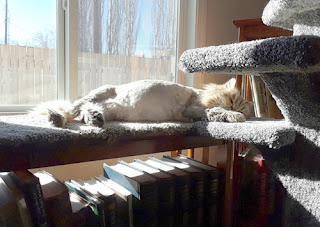 Neville, not to be forgotten, has used a heated bed after his own shave. But then, he retired to the bedroom and snoozed on the cat-tree nearest the window, which was open half an inch for fresh air during the night.  He knows where he can go for warmth; he just doesn’t always need it. 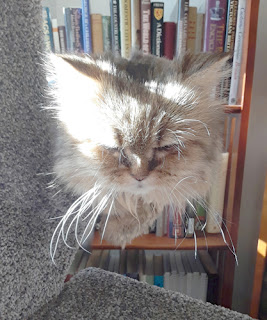 Things are moving along at the Cosy Apartment. The library is no longer closed at night - and I know Minuet comes out to drink from the water-bowl in the corridor (even though she has one of her own) - and today is the first time Madame’s safe-room will be open during my absence at work. She knows how to keep the other beasts at bay, though her protests at their presence are not as strong as they once were. Perhaps, in a  few years, I won’t even hear her yell at them. It may take less than a decade! But then, I’m feeling optimistic today. 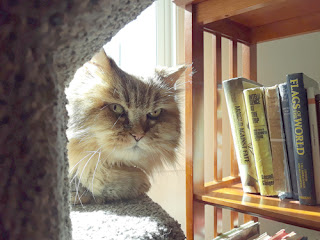