More than one reader has asked after Renn’s health. I thought it a good time to give a general review of the beasts’ well-being.

Renn is doing better than I expected. I don’t think the Mirtazapine is helping him all that much. I have found that it can be inconsistent, probably because the form in which I give it is a compound to be applied transdermally, and thus the concentration may not always be the same. I know at one time Raleigh was given a prescription for what I recorded in my blog as ‘an appetite-stimulant’ (undoubtedly Mirtazapine), and that was every three days. I seem to recall Tucker receiving a similar dose. Renn’s is every day. 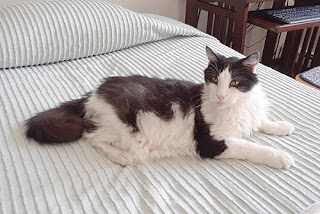 However, Renn is currently eating to my satisfaction, though this began rather before the Mirtazapine. He generally chooses between two kinds of hard-food, for which he will often ask. I present him with both bowls; sometimes he eats from just one, other times from both in succession. They are decent foods in terms of nutrition and I believe that the hard-food’s bulk is adding to his weight. Considering that he has been losing pounds for some time, this reversal is pleasing, though I worry that it is temporary. My big boy consumes very little soft-food nowadays.

Hector is too heavy for his size, I believe, but he loves his food, especially the soft varieties, and I feed him too much. But he is active and in good shape. 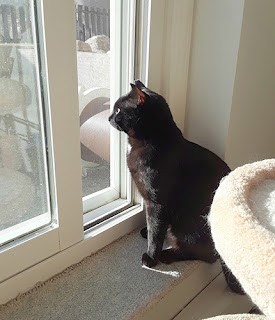 Another fatty is Neville. He is far too wide. He is not active, not in any way, and refuses to be stimulated to any unnecessary movement. As far as I can tell, he enjoys his life, but his life consists mainly of sleeping and eating. He does put on a burst of speed sometimes when exiting the litter-box, not unusual for many cats, but that doesn’t burn off many calories. Aside from his weight, however, he is doing well, and his previous ‘curve’ showed some good management of his diabetes. 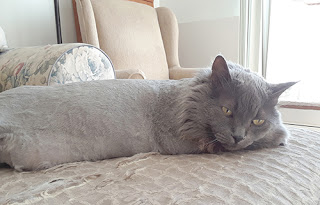 I am still learning about Minuet and what she should be like. I have not lived with a very-oldster before but I think for a cat heading toward twenty, she is in very good condition. Now and then she seems a little unsteady on her legs, but she has no problem climbing her new cat-tree, and periodically she still resorts to jumping up on it from the back of the couch, so she must be doing well. 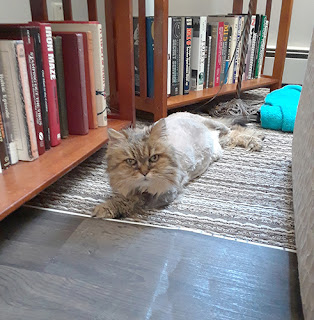 I worry about her loss of weight. But very-oldsters are usually light and thin. At her February veterinary visit, Minuet was rated as over-weight by the doctor who, however, expressed satisfaction at the poundage, remarking, as I have done before, that a cat - especially an elderly one - can lose weight so precipitately during an illness that a margin for loss is not necessarily a bad thing. 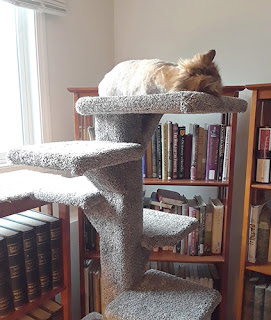 While there are some factors on which I must keep an eye, the condition of the Cosy Apartment’s feline inmates is good, if not very good. I am pleased. For now.