There is a cat who has a Facebook page and, I think, a blog, though I have seen him primarily on Facebook. (I suspect his humans help him with that, though…) He was very recently diagnosed with FIV.

Feline immunodeficiency virus is serious but not a death-sentence for cats. It suppresses the immune system, making it easier for a cat to contract other illnesses, and harder for him to fight infections. But cats who have it can live a long time – my late friend Raleigh had it – even the whole regular feline lifespan. It requires vigilance and care, but is not fatal.

What made me wonder about this cat on Facebook – I shall call him ‘Templeton’ – is that, though he was an outside / inside cat, I could not recall him associating with other cats, and certainly not figthing with them. FIV is spread almost exclusively through bite wounds, deep, ugly wounds received in life-and-death battles; scratches won’t do it. And for Templeton to be diagnosed with FIV at this point seemed odd to me. And it struck a chord in my memory about another cat.

Knox was brought into the PAW Society rescue-group in August of 2017. He was found in a rural campground, very friendly but ragged, hungry and dirty; probably dumped there. He was accepted into PAW. A ‘snap’ test for FIV was negative, but one for feline leukemia was positive. We wanted to make sure, so Knox’s blood sample was sent to another laboratory in a near by city. Tests conducted there came back negative for both viruses. To clear up this discrepancy, his blood was examined in a third lab, subjected to a polymerase chain reaction (PCR) test. This determines whether the actual dna of a virus is present. There is no hiding by a virus from the results of such a test. Knox’s health was confirmed: he had neither FIV nor feline leukemia.

This made me think that the oddity of Templeton suddenly coming down with FIV might be confirmed or denied by a PCR test. I suggested to his family that this be done, and they did so. The results showed that he did not have FIV. His humans and all those who love him were very pleased.

I write all this not for any credit for suggesting the test – others did the same, I believe. (Indeed, my recollection was that Knox was thought to have FIV, which is why I suggested the PCR test; in fact, as mentioned above, it was feared he had leukemia. The PCR test will work for both.) Rather, I wanted to show two things. One is that ‘snap’ tests can give false-positives. They are not infallible, so if there is any doubt, further tests should be conducted, culminating if need be in a PCR test.

The second thing I wanted to show is that even through time and distance, Knox was able to help Templeton. The latter’s family now has peace of mind and comfort in knowing their boy is healthy. For Knox, the test’s negativity gave him greater availability in being adopted; many people think that FIV is too dangerous in a cat for him to be taken into their family. This is not the case; cats with FIV can live very well with other cats and, as I explained, the chances of the virus’s spread are small – almost non-existent, if there is no vicious fighting (and there rarely is in socialised cats.) Even so, Knox could be promoted as healthy and strong.

Alas, this status did not last. Another, worse, feline disease – FIP – struck Knox in September, 2018, and he died on November 1 of that year. He was a sweet-tempered fellow, loved by his foster-guardians and doing well with his feline roommates. He not only gave joy to those who knew him, but was able to help even a cat who never met him. 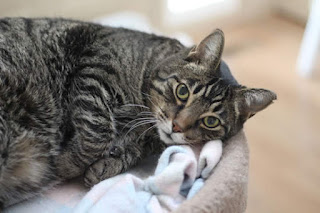