The rule in the Cosy Apartment is that when one cat recovers from an ailment, another must take its place. Minuet continues to improve (she actually climbed her cat-tree last night, which she hasn’t done in some time) but Renn went to the veterinary yesterday. 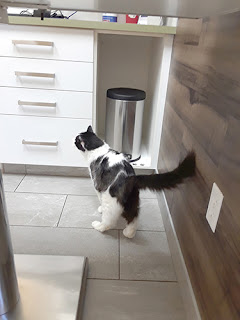 It was more of an inquiry than a real worry on my part. I had noticed, strangely, that my big boy’s chin seemed more prominent than it had been; a friend had thought so, too. I wondered if Renn’s jaw had started protruding. It could also have been simply a matter of perception: his face had always been large and wide, but he has been losing muscle mass over the last little while, and the chin may simply have started to look bigger. There was also the matter of Renn’s periodic drooling, which seemed not to be connected with happiness or hunger or sickness.

His chin’s appearance turned out to be mostly harmless. Though only fifteen, Renn seems to be aging as would an older cat, and has lost some of the breadth and depth of his once fleshy face. His chin and jaw are fine, though they indicate his advancing age (thus, it is ‘mostly’ harmless: getting old always comes with some damage.) But it was discovered that one of his teeth is in bad shape, and the doctor is sure that it is causing my big boy some pain. This would account for the drooling.

I will make an appointment for a dental procedure for Renn. I will try to get him in early next week. There will be a pre-surgical blood panel performed, though the doctor doesn’t think there need be a full series of tests; those were done relatively recently. I received an estimate for the cost, which will be substantial. But it needs to be done. My friend still has years ahead of him, I hope, and a right to enjoy them in comfort and ease. 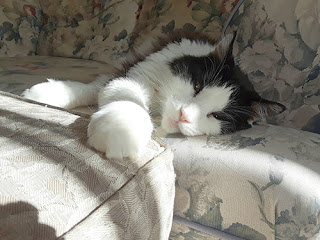