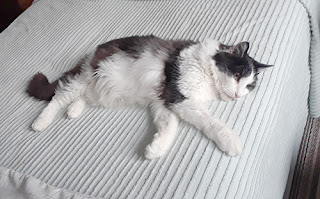 Renn’s surgery was a success, but it was more complicated than expected.

With the assistance of an x-ray, numerous teeth were found that were being resorbed, crumbling away and soon to be big problems for my big boy. Aside from the tooth that needed removing, six other teeth were taken out. As well, a tooth at some point in the past seems to have broken off from the a root, which was jagged. The gum had healed over it but it must have been uncomfortable at best. That too was extracted. I feel very bad that I didn’t have these seen to earlier, but without an x-ray, most of the problem-teeth were impossible to find.

Yesterday afternoon, Renn came home and wanted to eat. I like to feed a cat at such a time because he needs the nutrition, after having been starved since the night before, and the pain-medication that he was given at the hospital is still effective. Moderation must be used, though, so the anaesthetic, still in his body, doesn’t combine with too much food and cause him to throw it all up. Renn ate well, and kept it down.

That will stand him in good stead today, because, this morning, the pain-killer he was given after his surgery has worn off, and he is clearly feeling poorly. I gave him a dose of the medicine with which he was sent home; that will make him feel better for the next twenty-four hours. Even so, he ate very little for breakfast, as his mouth was probably smarting quite a bit. Hopefully, the pain will be dulled enough for him to eat something later today.

I was told by the veterinary technician not to feed Renn hard-food. This is good advice, as particles might get into the wounds left by the surgery, no matter how well they are bound up by sutures. However, Renn prefers hard-food and only licked at the soft-food I provided. I had a feeling about how my big boy would eat and decided to risk the hard-food. Sure enough, he ate a good amount without chewing the kernels. He may not have enough of the right teeth - or teeth placed rightly enough - to chew anymore, so he swallowed the kernels whole. It took him a few minutes to figure out how to do it, but I didn’t hear a single crunch while he ate. Even more rapidly than Tucker, my toothless roly poly, Renn adapted to the new circumstances. Thus, he was able to put something in his stomach, a deposit that will give him some strength while he recovers.

Now, it is a matter of providing pain-relief while he heals. After that, I expect Renn will be in good spirits, with fewer teeth, but less discomfort.