Minuet went to the doctor today. She had been throwing up clear liquid for a couple of days, and last night, puked up some blood, or at least bloody bile. She also refused her breakfast and was lying in unusual locations. I suspected a hairball and, if it had been a younger cat, would probably not have resorted to the veterinary. But at nineteen, Min’s health cannot be left in question.

Fortunately, the veterinary hospital to which I have been taking my cats for years is open Saturday mornings (and they have an emergency service after hours), and they were able to fit us in. The doctor was very pleased with Minuet’s general health: Madame’s lungs and heart sound good, her weight is remaining constant, and she is still not diabetic (a blood-glucose reading of 8.3). Her temperature (the taking of which was the only aspect of the visit to which Minuet protested) was normal; no obstructions or unusual masses were felt. 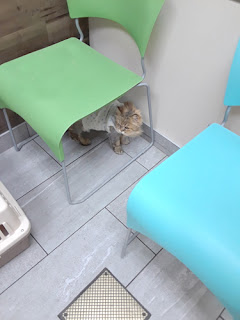 The doctor believed that Min’s problem is indeed a hairball. An injection of Cerenia was given to settle her stomach and reduce the discomfort a bit.

Minuet still has not eaten, however. I am not surprised. With my other cats, a badly upset stomach will often result in a reluctance to eat that extends beyond the time they are actually in pain, or feeling sick. I have had to force-feed cats in the past to get them over this hurdle, and may with Minuet. Once she understands that food will stay down, she may eat on her own.

I will give her this day to work up an appetite, but if nothing has been consumed by tomorrow, I will have to rely on the syringe. 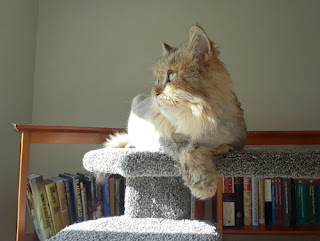