The anti-biotic I have been giving to Minuet since Monday seems to be working. Today, I returned home, opened the door of the library, in which Min had been locked – and which the other beasts had been locked out of – to find a splendid example of healthy poop in the litter-box.

I was surprised that it was in such a good condition, considering how liquidy Minuet’s deposits had been just a couple of days ago. Today’s was what I wanted to see. It appeared a trifle softer than tits counterparts had been a few weeks ago, but that I don’t mind: I had considered Madame’s feces to be rather too hard, anyway. They may return to that state, but as long as they come firm and shaped, I will be happy.

I am not so complacent as to think there may not be set-backs, and I am certainly not going to cease giving Minuet her medicine before the time set by her veterinary. Even so, I am optimistic. This is at the least a good sign. Such a poop is indeed solid progress. 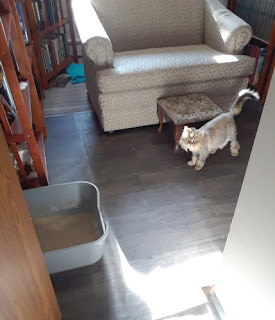