A cat’s paws are as individual as its personality, it seems. The colouring, the texture of the pads, how the fur grows in or around them, are all distinct qualities.

Josie’s, for instance, may look unremarkable but you’ll notice that not only are her pads of two different colours, black and pink, they are clearly one or the other, with no sharing of hue on one pad. 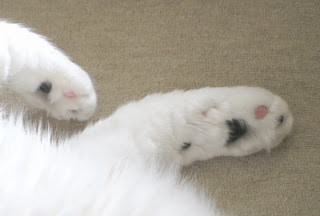 Renn’s, on the other hand (or paw), are of a similar colouring to my Chubs’s, but with a mixture of pink and black on the pads. There is also the fur that sticks out between the pads. This is due to his long hair. As befits the professorial nature of this cat, it is long and unkempt - though certainly not unclean. He is very hygienic. My big boy’s pads remind me of candy, maybe liquorice all-sorts. He does not like his all-sorts to be touched, by the way. Cutting Renn’s claws is a long process. 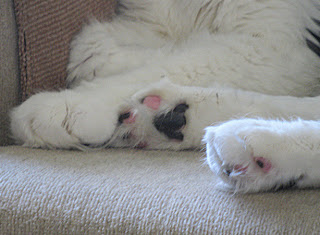 Tucker has paws which, in colouring and mixture, may resemble Renn’s, but the fur is much neater, much shorter. His fur is a very soft and smooth brush-cut, though there are correspondingly short tufts sticking out from his paws, in order to protect the pads, I suspect. 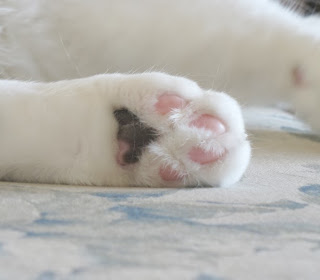 Bear-Bear has a little coarser fur than the others, and it shows in his paws. The pads are all pink, as suits this white and orange boy. He has an outdoorsy quality to his character - he lived outside for a while before being rescued, but will never have the chance to do so again, let me tell you - so his fur looks a little less tamed than most cats’, and his paws are longer, narrower. He is, after all, a long and narrow animal. 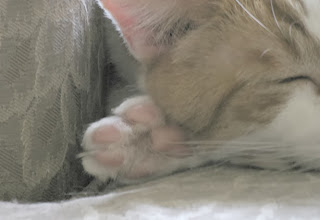 The most unusual colouring among the cats’ paws belongs to Cammie. Her shimmering Siamese fur is reflected (no pun intended) in her pads, which are puce, light for the most part, though you can see a dark one just behind the paw that’s in full view. She, like Renn, does not care for her feet to be touched. 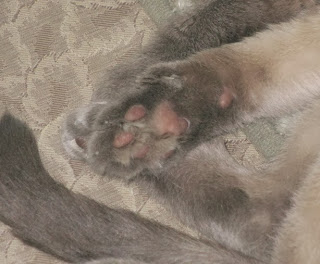 And finally, we examine Tungsten’s. I would say “last but not least”, but she is the least, in size, anyway. The fur between the pads is white, and shines, while the pads themselves are a strong yet delicate pink. You’ll notice something here that is unique among my cats: the rear-most pad, the largest, is divided into three segments. This feature is rudimentary in the others, but fully formed in the orange one. Her paws are soft white socks that are sometimes placed on my face while I’m in bed. She doesn’t mind me touching them, and cutting Tungsten’s claws is an easy and simple process. 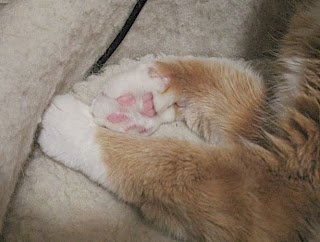 These are the paws of the cats who live with me, as individual as the beasts themselves. They are little extremities that characterise the whole animal, much more so than a human’s feet and hands do him. But don’t worry, I won’t be showing my paws any time soon.
Posted by John Bellen at 7:37 AM