The new toy called the Tackle Fish seems to be gaining in popularity. I’ve already explained how Josie likes to roll on it and bite it and generally have fun with it. This weekend, I’ve seen other cats take an interest in it. Tucker was wrestling with it, but was obviously too fast for my photographic skills, such as they are. The roly poly one has always enjoyed seizing toys and rubbing them across his furry face: a matter of fuzz-on-fuzz. The picture below, however, shows him after he has finished playing with the Tackle Fish. 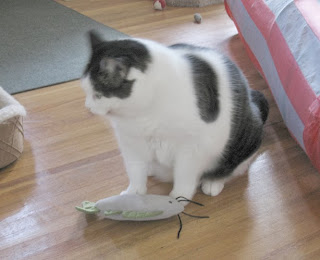 Renn also spent some time with the toy. His speciality is knocking toys about, though he will grab them and bite them if they are soft, and the Tackle Fish fulfills that criterion. He will spend a short time with an item, playing with it furiously, then stop. The Tackle Fish knew that it had been handled by a cat, though, by the time my big boy was done with it. 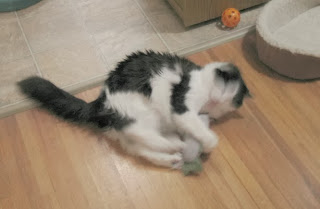 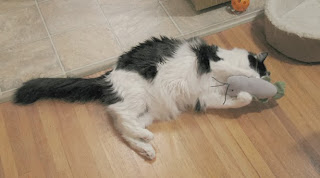 And finally, Tungsten decided to see what the fuss was about. She didn’t play with the toy but found that, as the label had stated, it was ‘loaded with potent catnip’. Well, not quite. The orange one reacts to catnip by sitting on whatever contains it, and doing nothing. Snoozing beside the Tackle Fish proves that it is not ‘loaded’ with anything stronger than a possible scent reminiscent of catnip. But she does seem to be enjoying the effect, nevertheless. 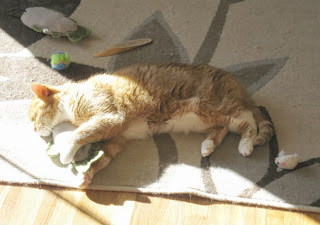 Alas, two of the three Tackle Fish I purchased are no more. A friend came over to visit Saturday evening and, to ensure that she would not trip over the many cat-toys strewn about the floor, I collected most of them and put them in a cardboard box. When I woke the next morning, I went to the sitting room to re-strew the toys, and found that someone who shall remain nameless (it was Tucker! I know it!) had wet over all of them. Rather than take the chance of having half a dozen fuzzy mice, not to mention a pair of Tackle Fish, lying about smelling of cat urine, even after washing, I threw them all out. I still have one Tackle Fish but must now buy a whole array of new toys, especially fuzzy mice.

Maybe it was a subtle way of telling me that it was time for new toys anyway.
Posted by John Bellen at 7:51 AM