Bull's Eye in a Bird's Eye

The cats love to watch birds out the windows. Some birds land on the lawns and hunt for worms, insects, buds, whatever provides their diet. Others land in bushes or on the boughs of trees. Others still rest on the edge of fences. Once in a while, some misjudge distances or destinations and hit the windows themselves. This one struck so hard it left a number of feathers behind. 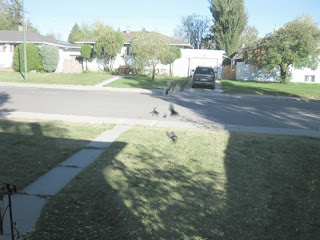 I looked about to find a body but arrived a few minutes after the incident, and found nothing. I think the bird was stunned but not killed, though I can’t imagine he remained unaffected. He hit harder than a previous bird whom I subsequently saw lying on the lawn and intended to bury. By the time I reached it with a shovel, it was sitting up. It flew away eventually, in an rather ragged line…

I’m not sure why birds hit windows. A recent study estimated that more than 22,000,000 Canadian birds are killed each year by hitting houses. How this statistic was derived, I don’t know. The window struck in this instance is a large one, and though many will explain this occurrence by saying that the bird didn’t see the glass, I must counter by stating that certainly it saw the sitting room beyond. One would think that it would have wanted to avoid that.

Birds hitting windows frighten my cats more than excite or interest them. They find it disturbing and, probably, unnatural. But it may merely confirm the opinions they have of their own species’ superiority. After all, cats don’t go about slamming themselves against windows.
Posted by John Bellen at 9:38 AM