Poor Josie was not feeling well yesterday. She ate her soft-food dinner with the other beasts after I returned from work. She hasn’t been eating all of her soft-food for the past few weeks. She still looks forward to its serving, and she retains a healthy appetite, but she has been leaving a small portion of each. I think she is just getting old.

I have tried different flavours to entice my Chubs and have settled on one, which she now seems to enjoy enough to eat an entire portion. Yesterday, it came back up on her, twice: at dinner and at snack-time. Not long after each meal, she retired to the library in the basement where she threw up a few times. First, she started crying, which is not something she usually does before vomiting. She sounded like Tungsten, on the rare occasions on which the orange one throws up.

I don’t believe that her discomfort was caused by any microbe or by very bad food. Others ate what she had, and from the same tin. Josie has always had a delicate stomach, and has thrown up numerous times in the past. She recovers quickly; this evening, she was hungry enough a quarter-hour later to be at the hard-food bowl. It may have been that the food she ate was a little tainted but not sufficiently to cause trouble for any other of my beasts.

I don’t know if Josie retreated to the basement because it was where the carpet had been, and cats gravitate toward carpets when they are about to up-chuck. If so, she was disappointed, for she found the new linoleum. If she had barfed on the carpet, I would have been cleaning for hours - and still not rid the fabric of a stain - if indeed I had found all of her efforts. Now, following some cleanser and a quick wipe with paper towels, the floor was clean, and ready to receive another dose of undigested food and bile. Oh happy day. 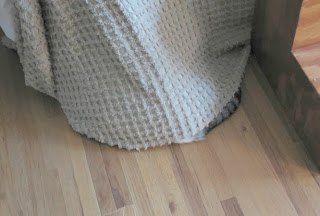