The Paths She May Take

Cammie's new life continues, and she is making progress down her road, though it’s not always in the direction I would like. She is a strong willed little cat, but is missing the opportunity to make friends. She prefers to barge her way through obstacles by throwing her tiny weight around.

She was a terror yesterday, stalking Tungsten, Renn and Tucker in turn. The first two can handle her well enough. Cammie follows Tungsten, who hates being shadowed, but the guest-girl doesn’t make any hostile sights or sounds until Tungsten makes a break for it and eventually comes to a stop. Then there is mutual hissing and growling. She does much the same to my big boy, though she varied the routine the other day by discovering the opportunities the nylon tunnel can give for sneaking up on someone. 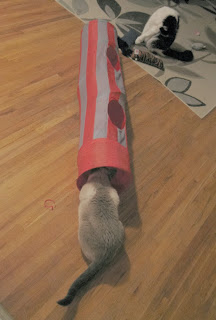 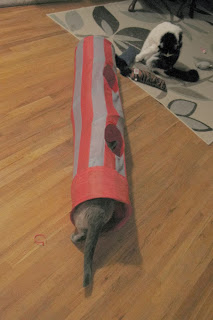 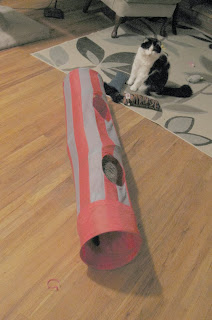 Tungsten will be followed relentlessly at times. At such moments, Cammie doesn’t do anything but settle down near her or around a corner. She’ll then act as if she were simply waiting for a train at a peaceful rural station. 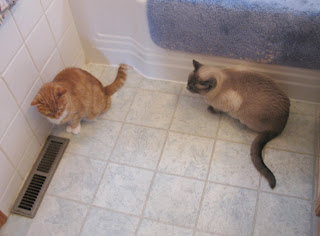 If the orange one would realise that a good smack from her would solve much of her problem, things might be different. I don’t want to encourage fighting, and in fact, Cammie wouldn’t take assault lying down, but I think a sharp, short melee would clear the air. Or maybe not. 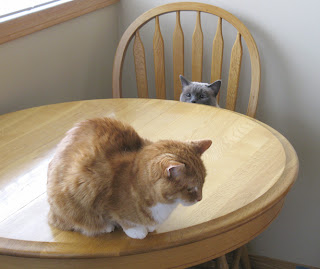 I feel worst for Tucker, the ultra-sensitive cat. As is the way with animals, Cammie seems to reserve the most aggression for the opponent who pushes back the least. Tucker will run and hide; he will hiss and growl but only as a last resort. He doesn’t want to fight - he’ll provoke, half-playfully, but he doesn’t like hostility of any kind. 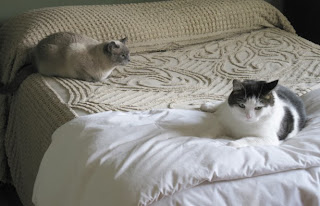 Lest you think that Cammie is all chaos, please let me assure you that she can be a sweetie, too, and the more time she has with me the sweeter she becomes. I believe that she enjoys being petted now, and I think she actually rubbed up against me one evening. My smaller foster-cat may simply be one of those cats who doesn’t like others of her species. Or, like one of my fosters past, Luther, she may just need the right one to open her to the world of feline comradeship. Anything is possible right now for Cammie. It’s a new day in her life and her path stretches ahead. 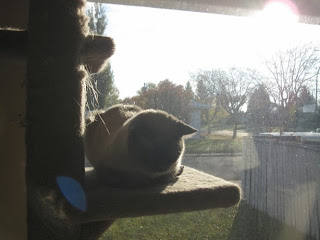