Bear-Bear has been seeing the inside of an animal hospital quite a bit recently, and will see still more in the weeks to come. He is suffering from a severe problem.

I had reported earlier that the BB was anaemic. His red blood cells are dying and not being replaced. His doctor thinks that there are two probable causes for this. One is cancer. The other is that his own body’s immune system is attacking the red blood cells, thinking that they are a disease. Bear-Bear will be receiving doses of a medicine called prednisone, which suppresses the immune system and may allow his red blood cells to regenerate. This will leave him more open to other illnesses, but at the moment, that is the lesser of two evils. 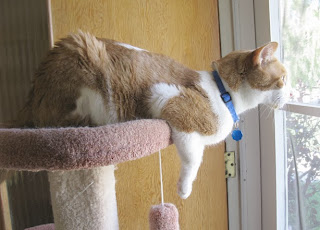 The prednisone came originally in pill form. Unfortunately, Bear-Bear is not like Tucker. That roly poly sits on my lap like a baby and takes his medicine with little fuss. He gives me a look of suffering, locks his jaws and does little else. A little baby martyr. Bear-Bear is different. He resists. He doesn’t fight or scratch; the BB is too good-natured for such things. He does, however, spit the pills out, something at which he is very good. So, he will be getting the Tungsten treatment: medicine in cream form to be rubbed in his ears.

He will then be tested once a week for a month. If his red blood cells have a resurgence, then his recovery is a possibility, with the help of medicine. If they don’t, then he will likely have cancer.

I am told the odds are that it is indeed a case of cancer, in which case, there would be no help for it, and he won’t survive long.

Whatever the outcome of his tests, he will continue to reside with me. If he is suffering from cancer, he will remain for the rest of his life. I don’t mind keeping him with me. I’ve grown attached to the long-cat, and if his last days are few, then I would like him to spend them with me. Since he was lost or abandoned - we’ll never know which - my house has been the most enduring home he’s known. He thinks he’s here to stay. But then, even when it’s time for the BB to go, he’ll stay with me. 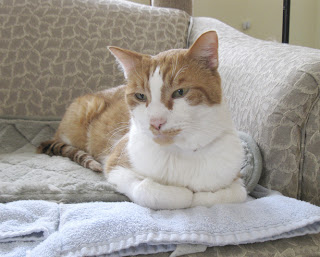