I am not by nature a patient man. It’s not that I can’t wait for something. I’ve waited long for many things, and for many things, I’m still waiting. Rather, I like things to be established from the beginning. If I move into a house, I want the walls already spotless, the furniture in place and the books on the shelves. When I come home from work, I want my dinner waiting for me. Since I have no maid or valet, you may imagine how often my impatience is rewarded.

Cats have shown me that many things, including relationships, are not to be rushed. They must evolve. Few cats come ‘owner-ready’, which is why so many would-be pets are returned by people who object to them crying their first night in a strange house, or hissing at new people. I knew this before I had a cat. But by watching cats grow accustomed to each other, and to people, I see that simply waiting can achieve much. Cats are intelligent, but even more willful. They want what they want, and if you try to coax them into wanting something else, they usually want what they want more.

So I employ the strategy favoured by the Roman general, Quintus Fabius, who avoided battles unless necessary, preferring to wear down his opponents. It seems to be working with Cammie, who now seeks out my lap for prolonged petting sessions and submits to being stroked even when she doesn’t really feel like it. She still hisses at me when she’s grumpy, which is often in the mornings, but by means of attrition, I appear to be wearing down her defences.

I am not the only one who is using the Fabian methods. Kola, whether he knows it or not, is doing something similar. He has a small-scale fascination with Cammie, and has not been put off by her annoyance of his presence. There have been growls and hisses, the Siamese Princess has chased Kola from one level of the house to the other. But the floofy one returns to sit near - though not too near - Cammie.

Yesterday, before going to bed, I checked on the cats, as I always do, and found Cammie on the cat-tree platform in the parlour, looking out the window. Kola was on the back of the couch, a couple of feet away, looking at her. I had heard no warnings against proximity from the princess.

There will be continued fights, anger from Cammie, and more scenes of Kola fleeing for his life. But there are also scenes such as the one below. The parlour is where Kola feels safest in the house. It’s ‘his’ room. But both Renn and Cammie use it, as well. The fact that he has to share his refuge with others fits in well with Kola’s unwitting scheme of slowly ingratiating himself with the princess. Only time will tell if this situation will develop for good or ill. In the meantime, these cats are writing their own page of history. 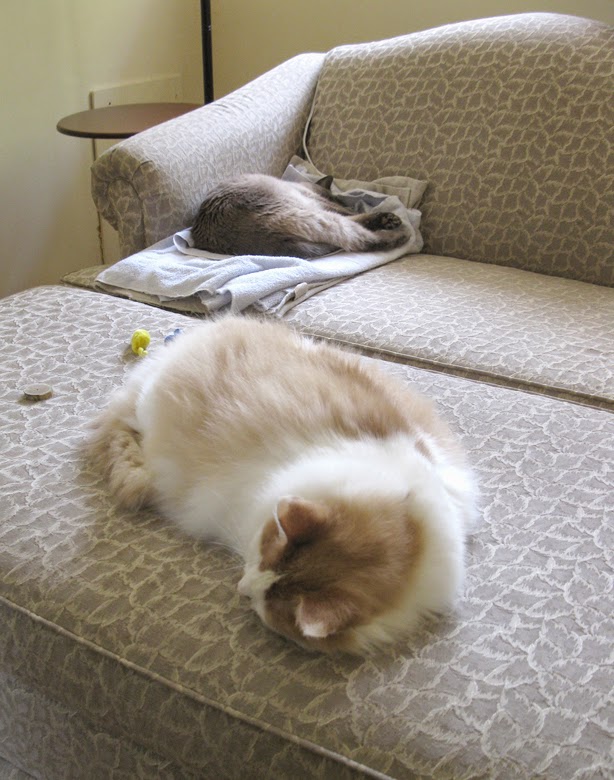