The Expanding World of a Foster-cat

Kola is, right now, an example of what happens when a cat grows increasingly comfortable with his surroundings. As I wrote yesterday, he is becoming more used to Cammie, and though Tucker still frightens him - you must be a pretty shy animal to be frightened by that sausage - Kola takes chances moving about even with Tucker in sight, which he hadn’t previously.

During movie-night this past weekend, Kola didn’t care for the crowded parlour. He didn’t want to share the couch with me and, after Renn came in and took the heated towels’ spot, the foster-cat decided to see where else was comfortable. He often lies on the hammock next to the micro-wave oven, but this time, he investigated one of the cat-beds - the heated cat-beds. I could see him from where I was sitting in the parlour as he tested the waters of the cat-bed’s cushion, and found them warm. He reminded me of my big boy in his caution. But, after trying first one foot, then the other, Kola thought the heated cushion to his liking and settled in. He has been back several times since. 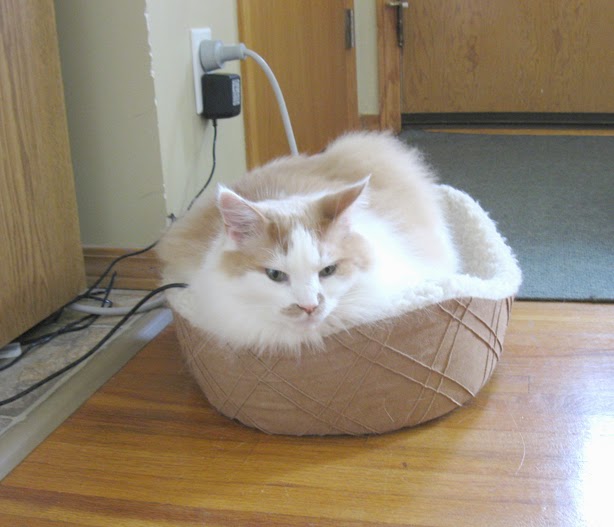 He also enjoys my collection of plastic bags in the closet. So does Cammie, to the extent that I accidentally locked her in one evening. I hadn’t been able to find her and, though I checked the closet, did not see her among the bags. I discovered her some hours later. She had been asleep the whole time, I think, and so suffered no ill effects.

Like the parlour, Kola and Cammie take turns among the bags in the closet. There’s little chance of me missing Kola nestled in there, his floof making him seem twice Cammie’s size. Kola is still a little hesitant about remaining in there long, since Tucker could sneak up on him from the other side of the door. And I don’t like a cat being in there unsupervised - Cammie's time alone notwithstanding - because I am afraid of them smothering. I tend to check for movement, or at least breathing, from time to time. 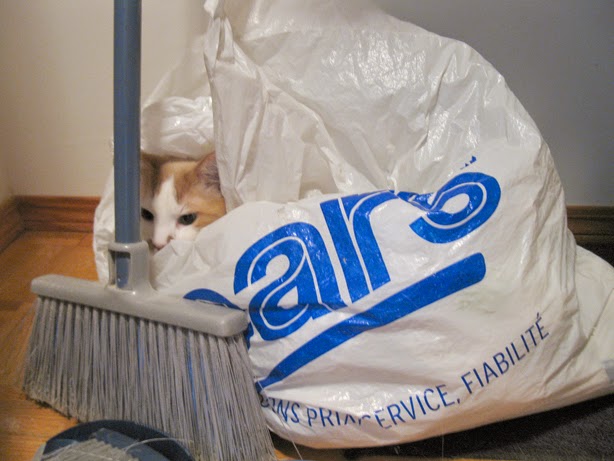 Bit by bit, Kola is expanding his world, just as he is expanding his acceptance of and by the other cats. I’m glad of that. My beasts’ world is limited enough, and I don’t like to see one of them, whether permanent or foster, having to be restricted because of fear or timidity. Kola has a long way to go, but he’ll get there. After all, my house isn’t that big.
Posted by John Bellen at 10:27 AM