Weak in the Knees

Tucker has developed what I believe to be a new symptom of his diabetes. He now has trouble jumping up on to the furniture. He enjoys lying on the arm of the couch next to me, and at night, he will leap up on to the bed to sleep there. He now cannot jump high enough even for his forelegs to pull up the rest of his body. I know that weakness in the rear legs is a problem associated with diabetes, a sub-condition called neuropathy.

The good news is that the roly poly and I go to the veterinary later today. I don’t think that the dosage of insulin he is receiving is sufficient to fight the diabetes. Naturally, the doctor wished to start Tucker off at a low amount, to gauge his reaction to it, and how it affects his problem. He has been getting one unit of insulin twice a day. This will probably have to go up.

There is a cat in the foster-care of the rescue-group to which I belong who is five years older than Tucker, and has diabetes. He too suffered from neuropathy, but thanks to the diligent care of his excellent foster-guardian, he is active and happy today. There is also a vitamin, methyl-B12, that I intend to question the doctor about.

I am assailed by doubts now as to whether I am injecting the medicine properly. Perhaps that is why he is not reacting well to it. I choose a spot on the side of his abdomen, and, so far as I can determine, the insulin is going in under his skin. The amount, I know, is very small, but I should still feel some dampness if it is not entering under the skin. I am likely administering the medicine correctly, but I still worry that I am not.

In any case, today, Tucker will see the doctor and more questions will be answered.

In the meantime, I am trying to instruct him in the use of the steps at the end of the bed. As he grows older, he will probably need them eventually, anyway. He has no problem going up and down the stairs to the basement - walking itself is still unimpeded. He is afraid of the steps at the bed, probably thinking them some weird and wonderful creation wrought by magic which he doesn’t understand. Tungsten used them gladly; Josie, with her girth, is happy to have them; Renn trots up the steps jauntily, though he doesn’t require them, and even Cammie has condescended to use them. But not Tucker. He fears them.

It’s bad enough that he has to cope with a medical condition that is causing him distress, and now his human is forcing him to crawl up steps. Life can be difficult for a roly poly sausage. 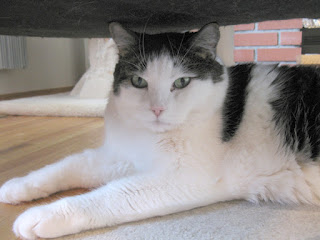