A Tale of Two Schedules


When Parker first came to live with me, his diet was simple. He was fed half a 5.5 ounce tin of soft-food twice a day, along with a quarter-cup of diabetic-appropriate hard-food twice a day. His meals came in the early morning and the late afternoon. I figured that he must be quite hungry by bed-time, and I disliked the idea of him going to sleep – or trying to – on an empty stomach. A growling belly makes a terrible bedfellow. So I spoke with Parker’s doctor, and arranged for the orange boy to have an additional quarter-tin at mid-day (if I am home to provide it) and another quarter-tin at bed-time.

Parker loves his food, and reminds me about his meals, especially the mid-day and bed-time meals. The last food of his day usually comes about ten-thirty. Actually, he starts reminding me of them sometimes an hour in advance. You can imagine my gratitude.

Every Saturday night is movie-night at the cosy apartment (please see my other blog (as noted on the side-bar) for movies I have watched and reviewed. Yes, this is a shameless advertisement for my other blog.) I have a relaxing bath, then make a bowl of popcorn and retire to the library to see a film of my choice, normally accompanied by Renn, who sleeps through the whole thing.

Depending upon the movie, it ends usually between ten-thirty and eleven. Older movies run about ninety minutes, often less, sometimes more. Modern movies are a couple of hours or longer. As you may be able to calculate, Parker’s bed-time snack is, on Saturdays, at the mercy of directors and screenwriters of whom he knows little. Initially, this perturbed him, and I would hear his abrupt trill start around ten, and pick up strength over the next half-hour. But this has changed.

Parker now rarely asks for his bed-time snack during the movie. As soon as it is over, however, the sturdy-boy comes trotting into the library, asking for his food. The movie could be seventy minutes long; it could be a hundred; Parker appears the moment it finishes.

Is it the sound of me standing to leave? Is it the sound of the remote-control being returned to its proper place? Is it me talking? (I generally don’t speak during the screening; I hate it when people do that. Renn is considerately quiet.) No matter what his cue, Parker now normally waits for the movie to conclude, knowing that he will not receive anything until then, but will almost immediately after.

We adjust our days for each other, I and the beasts. I have my bath only after play-time and their eight o’clock snack-time. The food-bowl – and Parker’s bed-time meal – come only after my movie. Patience is not always a characteristic of cats, but in one instance, at least, my foster-cat has decided that he will abide by my schedule, as long as I keep to his right after. 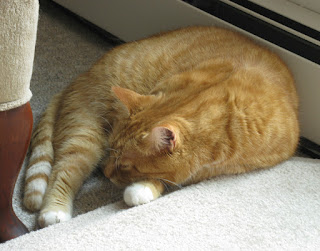