In the Beginning: Cammie


Cammie came to me in June, 2013, from an unpleasant situation. We were told by a woman that a cat was being physically abused by a boy in a household. She had the father of the family agree to her taking the cat for safekeeping, but she could not keep her. The PAW Society was contacted and, because it was an emergency situation, and no other spot was available, the cat, now named Cammie, came to live with me. 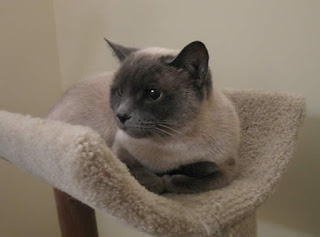 Cammie was distrustful. She hissed and growled when I ventured into the room into which she was placed. Two people were required to take her to a veterinary examination; we dropped a blanket over her and stuffed her into the carrier that way. She was kept in a room in my house until she grew accustomed to her new environment. Eventually, she met the other cats. She did not like them. She still doesn’t.

The newcomer seemed to be somewhat fascinated with Tungsten, though. Cammie followed the orange one about, much to the latter’s consternation. The two girls may have become friends, if given time. A decade or two. 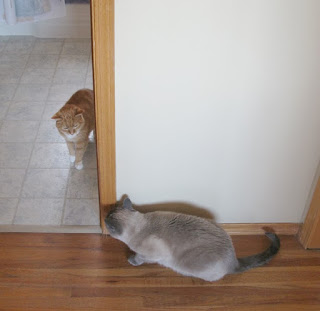 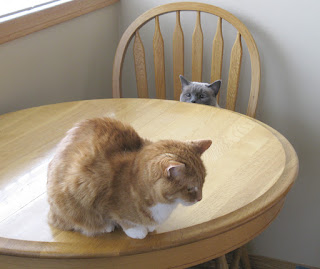 Gradually, Cammie began to trust me. I well remember hearing her purr for the first time, while she condescended to let me pet her. Then, she jumped up onto my lap. There are few things to compare with the first time you realise that an animal may actually think you aren’t the worst thing in the world. We still had far to go; as Churchill said after the Battle of El Alamein, “It is not the end; it is not even the beginning of the end. But it may be, perhaps, the end of the beginning.” 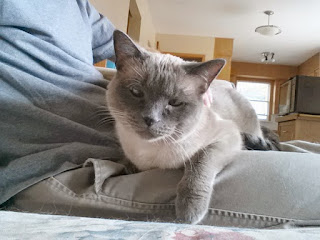 The princess received a shock in May, 2014. She was adopted. I was ambivalent about it. I was glad that she was going to a home, but worried that she would not be treated as she needed to be. All cats require time to adjust; some require more than others. Cammie required the most of all. There was something about the adopter (who, for convenience, I will call X) that made me uneasy; maybe it was how she didn’t seem listen when I explained what Cammie was like. She may have wanted Cammie just because she was Siamese. But this was my foster-cat’s chance, and I realised that she likely would not be given many. 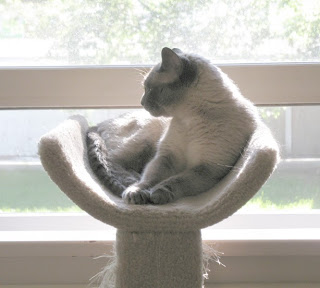 Off Cammie went to Regina. My unease increased over the next few weeks. I write the monthly newsletter for the PAW Society, and it always includes a story about each adoption as they occur. This entails an interview with the human involved. I had a very difficult time reaching X. When I spoke to her, she described actions that didn’t seem like Cammie’s; they were too friendly, too fast.

One of the PAW Executive Board, B, visits Regina on personal business every couple of months. She had loaned an extra-large carrier to X, for the long journey into Saskatchewan. When next in Regina, she stopped by X’s house to pick it up. No one was home. But X’s son drove up by chance while B was there. B asked how Cammie was. The son was loud and rude in describing how Cammie was mentally defective. B, shocked, asked if he and his mother would like PAW to take Cammie back. The son was glad to give the cat back, and went inside the house to get her. (The ease with which he secured Cammie made me wonder later if he had grabbed the right cat. He had; Cammie’s later behaviour provided a clue to this mystery.) 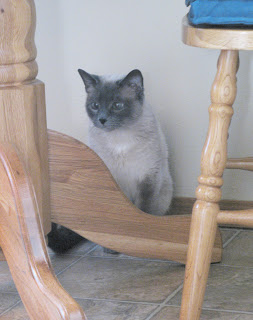 I received a message from B while watching a movie (Green Fire, starring Stewart Granger). I was on my holidays, I believe. When I read the text message (“I have Cammie”), I did a mental double-take. Wasn’t Cammie adopted? Soon, I was told the story. Again, I was ambivalent; knowing what had happened, of course the princess must come home. But she was not an easy cat, grumpy and contrary. I had visions of forever fearing a slashed throat every time she had to go to the doctor, or simply have her claws cut. But when she arrived back at my house, I was glad she had been rescued, again.

Cammie’s development did not receive the set-back I had dreaded. After a couple of days, she picked up where she had left off. Slowly, we became friends. I adopted her in April, 2015. 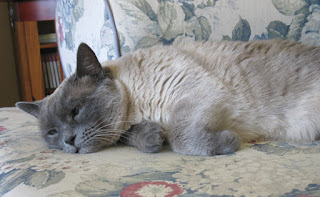 Now, in the cosy apartment, she has become an ‘ordinary cat’. I can pick her up. She doesn’t like it, but she lets me. I can cut her claws. One at a time. I can force-feed her. She hates me for it. But every time we have words, she will, a minute later, climb onto my chest and purr, if I give her the opportunity. She has taken to lying on my neck while I am in bed. She purrs and purrs. I breathe cat-hair. Is this an improvement on her criss-crossing my body – again, purring – while I am trying to sleep? But when she walks up to me on the bed and bumps my chin with her head, I will let her do pretty much anything.

She still screams bloody murder at times, just as she did when she first came to live with me. She has never intentionally harmed me. Perhaps she never would have. Perhaps she was always a great load of bluff. Maybe that’s why X’s son was able to seize her so simply in Regina – that and the fact that he probably didn’t care about being gentle. I certainly never intend to provoke Cammie into proving me wrong, but there may be more fear than ferocity in her, still. 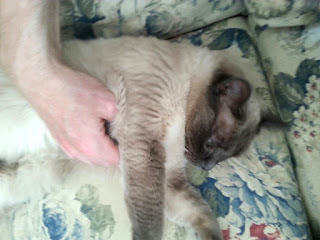 It was nearly miraculous how she was rescued a second time. If B hadn’t had to go to Regina, if X’s son hadn’t shown up during the few minutes B was at his house, Cammie would still be there. Well, probably not. She has had terrible episodes of what can only be allergic reactions to food – pretty much everything but what she is eating right now. What would her chances have been suffering such a bout in such a household?

Well, we don’t worry about such things now. I worry about Cammie eating something she shouldn’t; about her getting out through the screen door; about her choking on something; about her developing cancer. You know, the usual things. But the princess is my friend, and we worry about our friends. 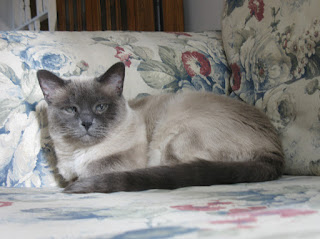