In the Beginning: Tucker


Tucker came to live with me under circumstances that were similar to Renn’s. He was adopted when he was a kitten, and had lived with his family for five years. Then, in late 2010, that family had a human baby. This can be unnerving to family pets, but is certainly not a problem if handled in certain ways. Tucker was not handled in certain ways. He started wetting where he shouldn’t and, feeling that they had enough with which to cope, his people evicted him. They returned him to the PAW Society, who of course took the refugee in.

Tucker needed somewhere to go, so he came to stay with me. He was lucky in that my previous foster-cat, Devon, had just been adopted. In fact, Tucker came to the apartment just hours after Devon was taken to his new home. That’s how pressed PAW was – always is – for foster-care. (As a side-note, Devon continues to do very well, eight years later. He is still with his adoptive family. They had two older girlcats at the time, and had to sort out troubles between Devon and them. But everyone got along eventually; a fourth cat was added and, after the two girls died of old age, just weeks apart, a kitten was adopted.)

Tucker was scared in his new environment. He wet outside the litter-box in my apartment, too, but only twice, and in cat-beds. These were disposable, cheap cat-beds, so they were thrown out. After that, he used the litter-box. He didn’t eat, however, and I was shown, for the first time, how to force-feed a cat. Tucker, with his roly-poly sausage shape, looked like a big furry baby, being held and syringe-fed. But he accepted his food, his giant green eyes wide with anxiety. Eventually, he ate on his own and started venturing out of the library, where he was initially sequestered.

Something I noticed about him was that he didn’t seem to know how to play. He was afraid of toys, especially wands and string-toys. When he started gently tapping them (his first interpretation of fighting with them), it was a breakthrough. He hasn’t looked back. 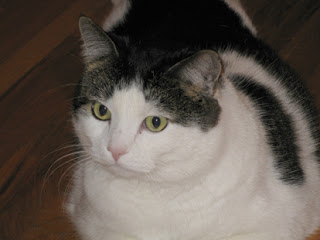 Like Renn, I thought Tucker would have a difficult time adjusting to a new family, if he were adopted by someone else, so I decided to keep the little fellow. Unlike Renn, I suspect Tucker really would have had problems. Renn would have adapted well enough, but Tucker may have had urinary issues, and those, notoriously, lead to many returns in animal-rescue.

Indeed, the roly poly continued to have urinary issues, but they became physical, rather than emotional. He developed blockages. I remember very well seeing him try to use the litter-box. It became so bad that he just lie down in it (I had taken the hood off one to encourage him) and looked up at me, as if asking for help. He went to the animal hospital that day, even though it was a Sunday (my veterinaries will open their office for emergencies). Tucker had his water-pipes unblocked and he came home. They blocked again, so he returned to the hospital. The second obstruction was cleared and returned as a third, even before he left the hospital. So he underwent a perineal urethrostomy. This surgery was a drastic measure, but it was successful, and since then, he has not had a urinary problem.

Being the bottom rung in the hierarchy – Cammie was adopted later but she is not one to settle for last place – Tucker has been sensitive to new cats coming to visit. There have been episodes of fighting between him and others - the roly poly can hold his own in a brawl pretty well – but supervision and sequestration make for a reasonably calm household. Otherwise, Tucker is a timid little tube-cat, and a bit insecure, I think. He will amble over from across the room just to rub up against me. I always pet him when he does that; if he makes an effort to tell me he likes me, I can’t ignore him. He keeps me company during meals (I suspect the draw is the food, and not me, however) and sits with me while I write at the dining table.

Though older than Renn by two years, and not the newest cat here in the cosy apartment, I can’t help but think of Tucker as the baby of the family. That’s what he was eight years ago, and that’s what my roly poly always will be. 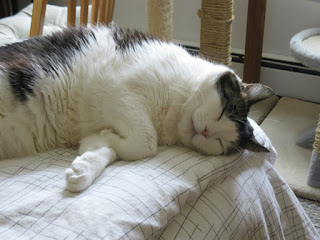