Some cats like adventures, and are always straining to get beyond the closed door, to see what the next corner is hiding. Other cats do not care for adventures. These cats are quite like Bilbo Baggins, in The Hobbit – indeed, the title character of that book (which is nowhere near as inflated and padded as the recent movies based upon it) – who declares that adventures are “nasty disturbing uncomfortable things.” These cats, like Hobbits, prefer to stay home, where it is safe, and meals are regular and, if so desired, frequent.

I harnessed the big boy to the newly acquired leash this afternoon, to give him a taste of the outdoors, as Parker enjoyed. You can probably guess, from the first paragraph, where this is going. Renn did not like his adventure. The leash and harness themselves did not bother him so much as did what they portended. Once outside the apartment, merely in the corridor, he cringed at the door, facing it, as it trying to push himself back underneath. I had to carry him outside.

Things did not improve. Renn immediately crouched against the grass – not caring that it was fresh and green and fragrant – and pulled at the leash toward the building’s door. He started crying.

Well, enough was enough. I had not wanted to distress the poor fellow, merely show him an avenue of fun he may not have travelled. It turns out, he did not wish to travel it. I picked him up again and hastened inside. After he was released from his bonds, his back arched, his tail shot up and he wagged his body as big boys do when they are pleased with events. To test him further, I sat on the bed; Renn jumped up and was purring a minute later. There was no harm done.

I must admit that I was surprised by the extreme reaction he felt. I thought that, while he probably would not have quite the unbridled enthusiasm Parker did (if I can use the adjective of a cat who is, indeed, bridled, in a way), I thought he might be intrigued in a wary fashion. This was not the case. Renn will of course not be forced to undergo such an ordeal again. He is and will remain an inside cat, even when the outside is limited by a leash.

It turns out that Renn is very like Bilbo Baggins, right down to the furry feet… 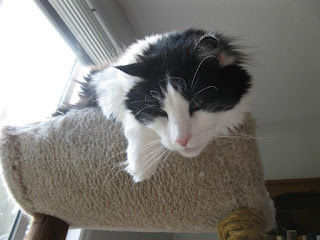