In the Beginning: Renn


After Tungsten and Josie, Renn came to live with me. His name was originally spelled with one N, and I am not sure why or from where he acquired the second. He arrived, as so many cats do, as a foster (hence his full name of Renfrew Foster), coming to live with me in May of 2010. 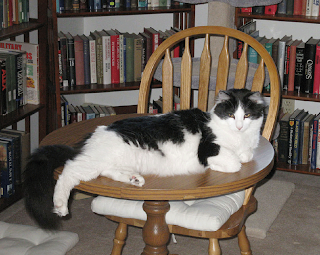 In  August, 2007, he had been rescued as a kitten, along with his four brothers and mother, who was named Alberta Rose by the PAW Society, into whose care they came. The young family had been abandoned in the coulees (the earthen cliffs cut by ravines that line the river here in Lethbridge). At three and a half months old, Ren and his brother Charlie were adopted together, but returned in the spring of 2009. They then went into foster-care together.

Trouble arose when Ren bit his foster-guardian. She explained that she had been trimming Ren’s bum-hair, of which, as a long-haired beast, he has plenty. I came to know that Renn does not like his nether regions attended to, nor does he like his claws cut. I must see to those tasks patiently and sometimes over a few days. My big boy gives a warning groan when his own patience is being tried, and that is a sign to pause, calm him and attempt the chore again later. I doubt that he had developed such a characteristic at that point; on the other hand, his guardian may have trimmed too close for comfort. The result was that Ren was banished to the basement of his foster-home, and PAW was told that another must be found for him. I had fostered three cats by then, and offered to take in Ren.

We were told by the foster-guardians, who retained Charlie, that Ren did not like people and preferred to remain in the basement. I suspect that he did not like the people in the house, who had decided that he was a bad cat, and preferred to remain away from them. In my home, Ren was timid (which he is still, even after he achieved the extra N in his name) but anxious to meet the other cats, and me. He loves people and, while he is initially shy, it does not take him long to test the waters, especially if the newcomers sit still for a few minutes.

His brothers have all been adopted – Mondo, Dusty, Charlie and a fourth, whose name I am sorry to write, I do not know. All share Renn’s big facial features, big size and big hair; colouring differs except for Charlie, pictured below. (Charlie was eventually adopted – into the same home as his brother, Dusty.) I decided to adopt Renn because I thought his timidity would prevent most people from getting to know him well. I don’t now think that was really the case, but he seems comfy enough here, so he may as well stay. 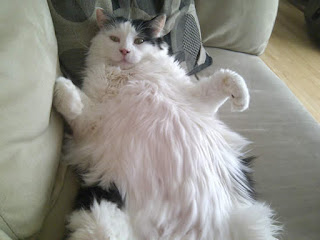 Renn has become the most tolerant of new cats – which isn’t really saying much here – and became good friends with Tungsten, who returned his feelings, after she had established her dominance by striking Renn once on the top of the head so strongly the blow made my teeth rattle. 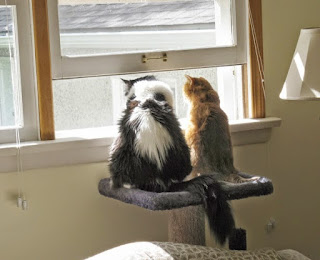 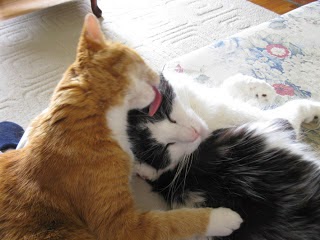 Healthy and strong, and going on eleven, my big boy seems set fair for a long life, and, paws crossed, he and I will live it together. 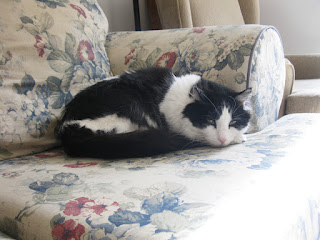