A New Bit of Snug

We have a new cat-bed in the cosy apartment, given by a friend as a gift. I didn’t have a spot for it until after the Christmas tree came down yesterday. As soon as the new bed was in place, however, the beasts were examining it. Raleigh was the first to try it, and, to judge by the amount of time Peachy spent in it, he approves. 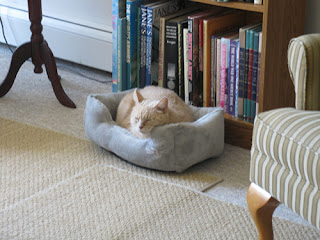 Cammie wandered out to the sitting room at some point in the afternoon. I wonder if she knew that something had changed and wanted to check it out. In any case, the princess found the new bed and also seems to like it. (She’s facing away from the camera but, since she’s blind, I don’t imagine it matters to her which way she looks.) 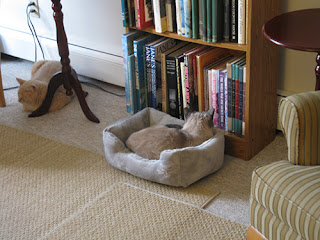 The one who liked it the most appears to be Josie. My Chubs spent much time in the new bed, especially in the evening - though she also likes the heated cat-bed across the sitting room. 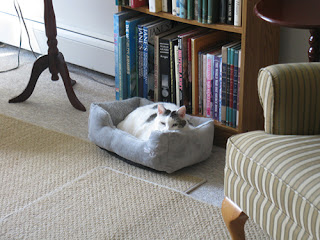 I am pleased to have this new snug resort for the beasts, as the second heated bed is now in the bedroom and monopolized by Cammie. The new one, though not heated, has high sides, as you can see, and a deep cushion. The latter doesn’t come out, so I cannot place a heating pad inside the bed, but I can put one underneath it - with a blanket under that - if need be. But so far, the cat-bed by itself is drawing satisfied reviews from the critics.
Posted by John Bellen at 7:28 AM