Will You Be My Neighbour?

The relationships of the cats in the Cosy Apartment are always interesting, and that between Raleigh and Neville took a step forward this weekend. Raleigh has long wanted a pal, I am sure. Initially, he tried to befriend Renn, but my big boy was satisfied with things as they were, and nothing came of it. Because of the topography of the apartment, however, Peachy has found himself sitting or lying near Neville quite often. This may have given him the notion to attempt an approach to the Thin Man. 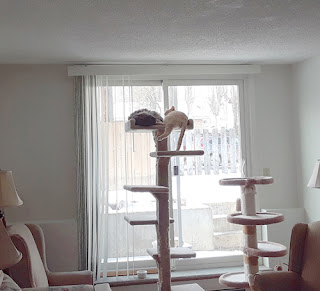 Nev was at the top of the tallest cat-tree, in the sitting room. It’s a favourite resort of his. He no doubt feels safe from interference by other animals, and he can stretch his long frame out. Sunday, I watched as Raleigh slowly made his way up to the top, platform by platform, talking as he achieved each new level. I knew immediately that he was seeking company; he almost never goes to the top of that tree, even when it is vacant, and that may be due to his inadequate grasping skills; while the platforms make ascent easy, a cat indubitably feels that his claws are his insurance policy. But this time, Raleigh was deliberately climbing to the uppermost level. 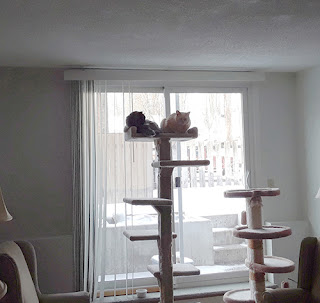 Once there, he settled in, turning a couple of times. Nevsky regarded the interloper but apparently did not think anything bad of it. So far as I could tell, the Peach didn’t use the vantage point to look out the window for more than a minute. He was facing inward most of the time. That and his usual avoidance of that height suggested strongly to me that he went there for Neville’s company. I returned to the sitting room an hour later, and they were still there. 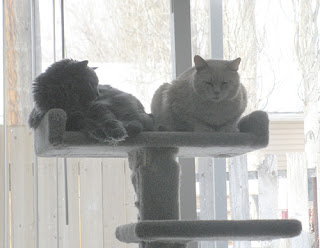 I hope for more to come of this. The two are unique in the apartment right now. Neville is new. He came from an environment where the many cats were a liability to him; those here are tolerable because they leave him alone. He seems to prefer that, though he may sense that Raleigh is too easy-going to cause stress. 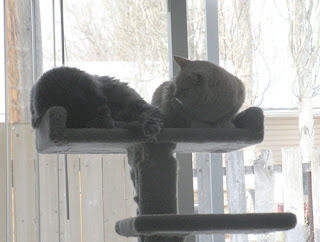 Raleigh, for his part, being a former colony cat, understands different personalities in a group; he is the cat least fazed by group dynamics that I have known. He accepts warnings from his fellows but otherwise seems to assume felines think of him as he does about them. And he may have seen friendships in the colony on the fringe of which he lived, comprehended them, and wished for one himself.

I will keep my fingers crossed for these two. 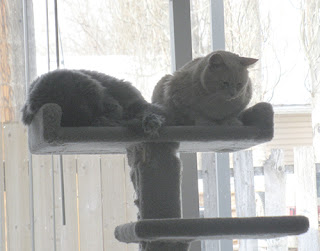