Raleigh is polydactyl. One might describe him as multipolydactyl, since he has extra toes on each foot. While they are noticeable on his four feet, they are most noticeable on his forefeet. The interesting thing about the extra toes is that they appear to make it more difficult for him to pick things up. Peachy tends to scoop objects, rather than grasp them. While other cats will curl their toes (and thus their claws) around an item, Raleigh can at best gather it to himself. I don’t think his toes are as prehensile as most cats’. I have not seen him climb a cat-tree (except by stepping from one platform to another) or scratch at a carpeted post; he scratches at the corners of wooden furniture when he is hungry, but I don’t believe his toes can curl enough to engage a carpeted surface.

I wonder a couple of things about this. Is this characteristic of all polydactyl cats? I don’t think it is, but the Peach is the first one of whom I have first-paw experience. Secondly, does it make survival in the wild more difficult for an outside-cat? Raleigh had a number of disadvantages as a feline trying to get by outside; with FIV and stomatitis, and being unable fully to integrate into the feral colony on the fringes of which he hovered, a disability with picking up or grabbing an object would have sealed his fate.

In any case, his pontoons make watching him interesting. He certainly is not limited in his delight at playing, nor at enjoying a good snooze. In other words, for an insider-cat, polydactylism is no problem at all. 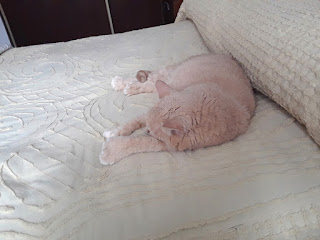 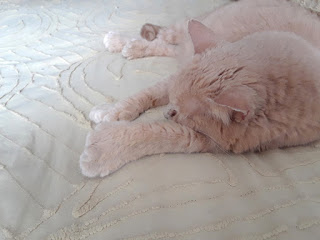 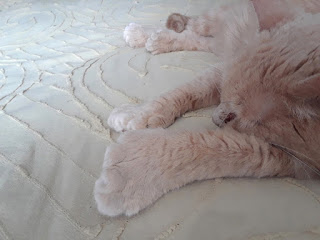