There must come a milestone on his personal journey at which a cat decides that he can trust a human. Raleigh has been living with me since August of 2018. In the last few months, I’ve noticed a change come over him. He had been coming up to me just prior to meal-times and letting me rub his head - a pre-prandial ritual of sorts - and gradually permitting me to approach more and more at other times.

Now, though, I can come up to Peachy at almost any time and he will allow me to stroke his head or rub his face. Yesterday, I had to cut his claws. I was able easily to pick him. He still is very uncomfortable with being held, and tried a couple of times to leap from my arms. But when it was over, I placed him next to me and he walked away; he didn’t run. Raleigh then accepted as compensation the treats I gave him, coming out to me with just a little hesitation. And a few minutes later, I walked over to him, knelt down, put out my hand and over he came for a nuzzle. 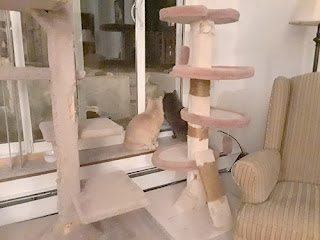 He and I have another ritual. Well, the Peach developed it. After snack-times now, he expects to have his chest rubbed. He will eat one, two or three helpings of his food, depending on his appetite, and then, when I bring another portion, he will ignore it and come up to me asking for a chest-rub. So I will start petting him and, eventually, he will flop over, always with one hind claw hooked in the rug, and I will rub his chest so vigorously that I can move him around the floor doing it.

I must be careful not to pick Raleigh up for claw-cutting or veterinary visits if he comes to me on trust for some attention. I don’t want to use his growing confidence that way. I can collect him simply by coming up to him now - as long as I don’t do it too often.

Only rarely does he scurry from me these days. I believe he has accepted me as a human who won’t hurt him. It’s taken a long time and he has a ways to go yet. But he is getting there. This trust, and his possible friendship with Neville, shows that he has come to think of the Cosy Apartment as his home. For a fellow like Raleigh, that has been a lengthy and worrisome voyage. But he may have at last arrived. 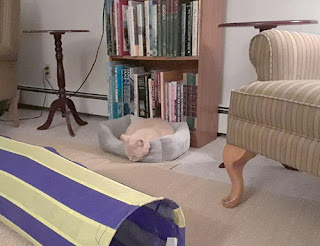