The Dawn of the New Year 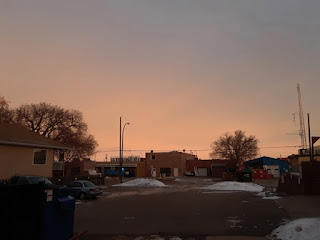 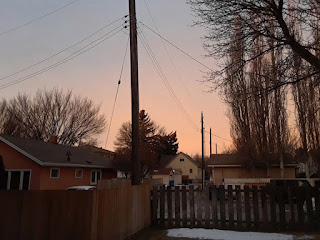 The first morning of 2020 did not look like these photographs, unfortunately. It dawned overcast and chilly. These pictures are from a few days ago, on a weekend morning. (And these are actually the morning's glow in the north and west, respectively, reflecting the sun's rise in the east.)

Even so, the new year has begun. I find that my morning routine has changed from this time in 2019. I formerly woke up on my days off at 5.30, fed the beasts, gave Tucker his insulin injection and, after cleaning the litter-boxes and eating my own breakfast, returned to bed. Now, I stay up.

I find that if I get all the chores that need doing out of the way early, I can relax more later on. I may not have any more time in which to do it, but it feels better. I usually have a nap after my chores have been completed, which restores some of my consciousness, if not my energy.

Perhaps this is part of growing older. I had noticed as a boy that old people (ie. in their thirties and forties) rose early; very old people (ie. in their fifties and sixties) rose even early, and ancients (ie. too old to count that high) woke up practically the night before. Now, I am doing it. I am certainly no more alert at dawn than I am later; I always seem to be tired. But I can have my nap without worrying about having to do too much later. As well, if I need to go out, there are fewer people about and many shops are open early anyway. When the spring and summer come, bicycle rides when the day is very young are always enjoyable.