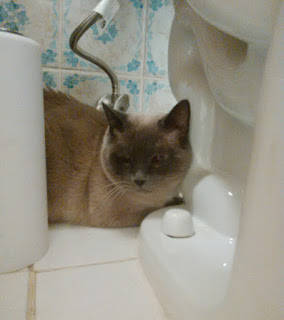 A friend (“A”) sent me a photograph of Cammie. She found it on her telephone; it had been taken five and a half years ago. Some of you reading this may not be aware of the awful adventure my princess underwent in the late spring of 2014. You can read of it in detail (https://ihavethreecats.blogspot.com/2014/06/cammie-isback-with-me.html) but in short, what happened was that Cammie was adopted by someone from Regina, five and a half hours away from my town. I had my reservations, and not just with the distance that Cammie would have to travel. The adopter wasn’t quite right, but I knew that Cammie would have a hard time being adopted, so we in the rescue-group thought this would be her chance.

It wasn’t. The adopter was reluctant to report on Cammie’s progress - something which isn’t necessary for new adopters but which we wanted because of the cat in this case, and the distance involved. She was difficult to get contact. Fortunately, “A” travels to Regina now and then on personal business. The adopter had borrowed a large carrier from “A” to make Cammie’s journey more comfortable, and it was intended that “A” collect it later. When she did, she learned that Cammie was, to put it bluntly, not being appreciated. Cammie was returned.

The picture is of my Siamese girl in the bathroom of a bed and breakfast, on her way back to stay with me - stay permanently, as it turned out.

I will always be grateful that “A” stopped by Cammie’s new residence while in Regina, and grateful for the miraculous set of circumstances that allowed her to bring Cammie back. The little cat didn’t suffer any lasting effects from her ordeal, and was her old self quite soon afterward.

That was before her battle against severe food allergies, and of course her stroke and blindness of last year. If that abortive adoption had proven permanent, I don’t think Cammie would have survived her allergies. She likely would have been euthanised. If not, she would certainly have been following her stroke. Her short-term adopter did not put in the effort to acclimate Cammie to her new environment; she would not have done any more to save her from the possibly deadly effects of her allergies, and the outcome of her stroke.

But Cammie has adjusted to every calamitous event in her existence. Her world is very circumscribed now, but she has worked out a new life, and is, at least, comfortable. Because bumping into another cat is startling to her in her blindness, and results in hissing and growling, the others stay out of her way; even Neville has learned this, and keeps a wary eye on the princess when she is roaming. She is not the top-cat of the household - she cares little for arranging the others’ places and managing their behaviour - but she is a force in the cosy apartment, as may be judged by this series of photographs, which may be entitled ‘Waiting Their Turn’.

I am happy that my Cammie was brought home and that she is still here, at home. 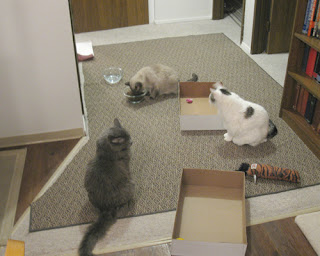 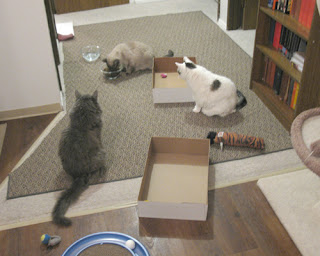 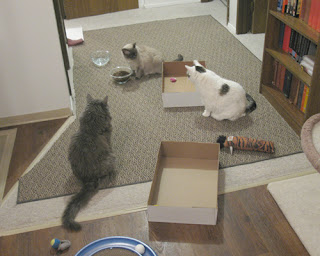