In between the continuing news about the kittens, I wanted to mention my old lady, Josie. She is doing rather well these days (if I can write that without jinxing her). She is eating a little more than before; not that her food consumption was at a dangerously low level but I always like to see a cat with a healthy appetite, especially if she is elderly. She even has started coming out of the bedroom to demand her meals, especially breakfast, as she used to do.

Except for that, my Chubs spends most of her days and nights in the bedroom, where she tolerates the Felons when they are on the loose. She has given them what-for more than once, and they have so far respected her admonitions. I keep an eye on their behaviour, as I would rather they be put out than Josie be anxious. So far, though, she has maintained her equanimity.

Her joints appear to be bothering her less than previously. This may or may not be due to the subcutaneous fluids that she is receiving twice a week. (She loathes the procedure, but I think it is helping her.) She even climbed to the top of a bookcase in the library on one of her rare outings.

Josie sleeps much of the time, of course, but nonetheless takes an interest in the outdoors, as seen through the bedroom window, and enjoys a good face-rubbing session, for which she sometimes asks. She still likes to spend some of the night on the bed with me, as in her youth. She has no difficulty making a trip once or twice a day to the litter-boxes, and her vomiting, which used to be almost frequent, is rarer now, perhaps due to her more select intake of nutrition.

So the Great White spends her days and nights simply and, I think, contentedly. It may be a dull life for us humans, though I like to believe that it is an enjoyable one for an old cat. I hope, and will do all I can, to keep it so. 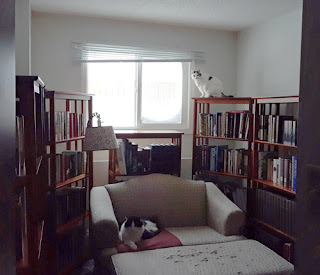