The Felons Have Their Mugshots Taken

The kittens had the photo-shoot for their website profile yesterday. They were shy of the new human who came to take their pictures, but consented to pose for several good images. Oleo and Bisto are now formally available for adoption, though they won’t be going anywhere before their first veterinary visit and vaccinations in the first week of December. Screening potential adopters will be tough but necessary: everyone loves kittens; someone who will also love the adults they grow into is not as common. You can see their ‘official’ pictures here: http://pawsociety.com/OleoandBisto.html.

I took some photographs myself while this was going on. Renn allowed the Felons to come close, though he didn’t seem to enjoy the experience. He whined and cried a bit and only once gave a real warning, which the little ones heeded. Yet, like Josie, my big boy did not move away or leave the room, which he could have done. (Josie was tolerant last evening as the kittens played and chased each other in the bedroom. When the two of them ran right over my Chubs as she lie in the heated cat-bed, though, she hissed, looked at me, and climbed to the top of the tallest cat-tree to continue her snooze. I could almost hear the sigh.) 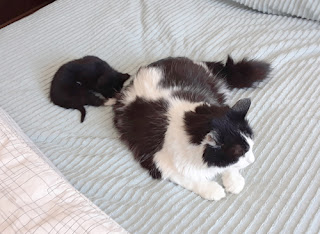 You can tell from these pictures, I think, that Bisto is the more outgoing of the two brothers. Indeed, Oleo hid under the bed when my friend came in to take pictures. Bisto did as well but came out a minute later at my urging; his sibling took more coaxing (ie. I had to lift him bodily from his refuge.) With a second person present to hold squirming kittens, I was able to cut the Felons’ claws. Bisto’s was the sharper by a bit, but Oleo felt his loss more: he tried climbing up the bedspread subsequently; it was like watching Superman after he had been deprived of his powers. 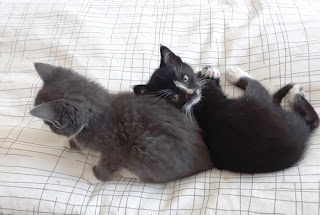 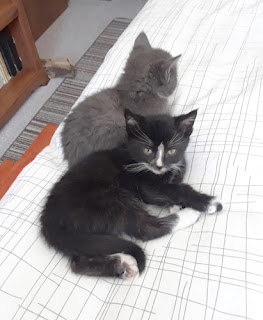 After the visit, the Felons were tired, and slumbered on the bed. Sometimes, they plop down separately, and sleep where they fall. 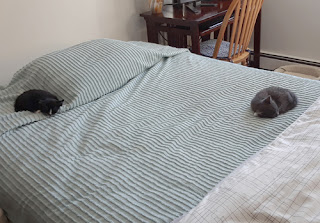 Afterward, however, they went back into the bathroom for a spell, where they cuddled together in the shaggy bed, and lie and, eventually, fell asleep in these adorable positions. It was a full day for them. 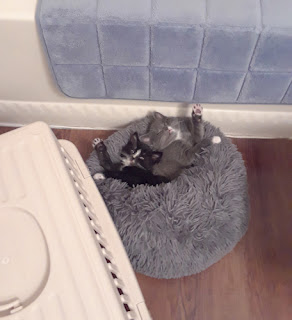 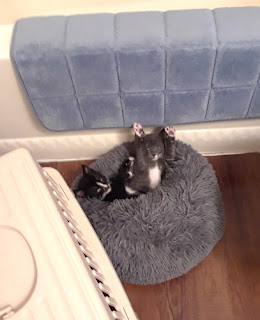 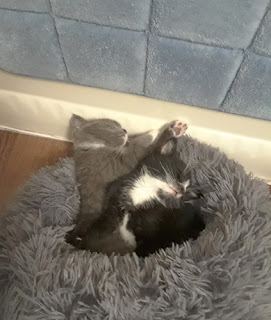