They May Get Time Off for Good Behaviour

The Felons continue to grow and learn, every day, and entertain, at the same rate. They love playing in the relative freedom of the bedroom. They run and climb and jump and gambol. 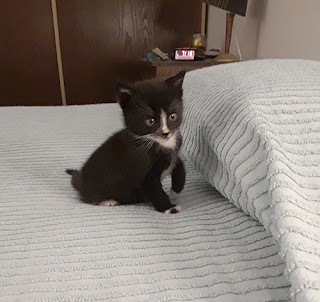 One thing I didn’t think of, but would have with any adult cat, is bringing a litter-box into the room with them; the door is closed to allow me to look away for a second or two without them escaping into the apartment. Oleo went to the door and started crying. I figured that he needed to relieve himself, so I quickly fetched their box. He used it right away, then went back to having fun with his brother. They are smart tiny beasts, who try their best to keep clean and tidy.

A friend gave them a cushy little bed, which, if they were grown-ups, would have spread when they lie in it. As they are so minute, it nearly swallowed them. But they liked it nonetheless and were very snug in it. 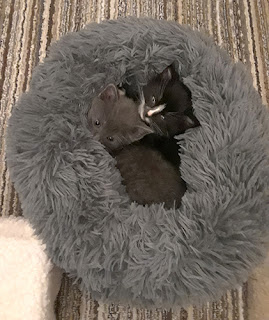 After I put them to bed - they rarely make a peep after the lights are turned off (and I mean that literally: these tiny creatures peep) - they evidently felt they’d had enough cuddling and chose another spot for some of the night. This is how I found them a couple of hours later. 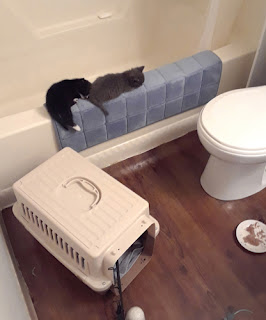 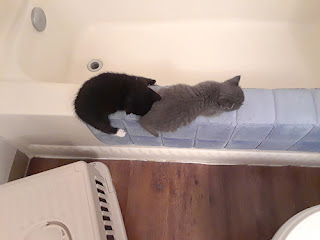 (Katie, do you think Bisto is how you looked when you first learned to monorail?)