The Felons Turn to Vandalism - or Is It Murder?

The Felons continue their rampages through the house. I hope to have another video published of their activities soon. In the meantime, though, I need to lay this charge at their feet.

Some time ago, a friend sent my cats a number of toys. Among them was this representation of a fox; he turned out to be the most popular of the gifts. So it would appear with the kittens, as well. Their interaction with the fox was, alas, not as civilised as, say, Tucker’s. Oleo or Bisto, or both (though I suspect Bisto, as he was the more drawn to it) not only killed the fox but mutilated his corpse. 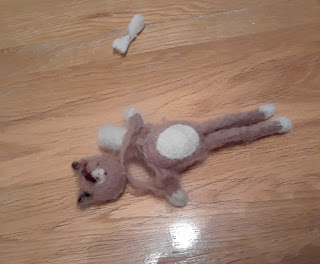 First the moustache was torn off, and then he was beheaded, though not, as you may see, completely. The horrid remains were left behind the couch in the library, perhaps in the hopes that I would not find them. I did, however: they were next to one of my books, a corner of the cover of which featured newly made tiny-teeth holes…