Neville continues to eat on his own; certainly not as much as he has in the past, but more than he has in the past week. I want him to eat still more, but am satisfied with his progress in that regard. He is drinking a greater amount of water, though, despite his sub-cutaneous fluids. He will be seeing the doctor again tomorrow or Tuesday.

Tucker, after a day of feeling better, has relapsed a bit. I will be force-feeding him the sludge I’d prepared for Neville.

The little Felons have made a great discovery: the bedroom. I let them into that room yesterday – they are here now – and they found the space – small but considerably larger than the bathroom – to be exciting. They explored every corner and displayed more of their individual personalities: Bisto, once shown how to use the stairs, quickly caught on; Oleo saw the dark under the bed and wanted to find out what was in it.

As may be seen from the photographs, Renn and Josie were in the bedroom at the time. They were high up the cat-trees and I knew they wouldn’t come down to investigate: they could do that from where they were. My plan is to let the perma-cats get used to the Felons from a distance, then allow them proximity under close supervision.

For the kittens, I think the best thing about being in the bedroom is the space in which to run. And run they do, zooming about in their manic/awkward fashion, tiny little thumping noises being heard in bursts from all over. And they are climbing even better now, perhaps a sign of increased strength or skill, probably both. Oleo can now make it up to my lap when I am sitting.

For me, the best thing about the kittens being in the bedroom is that all that exercise tires them out. Just now, they’ve fallen asleep, cuddled together, between my slippers. I will put them in their carrier/nursery for a restoring snooze. I am now free to clean their little world. And get some rest myself. 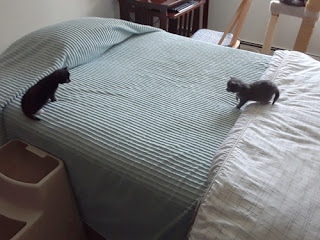 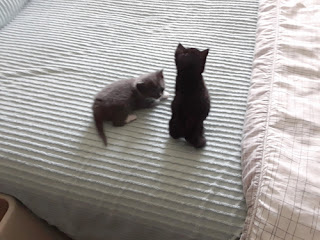 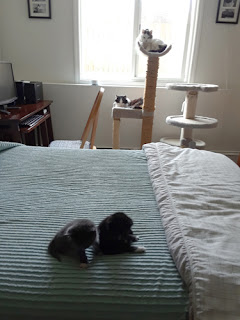 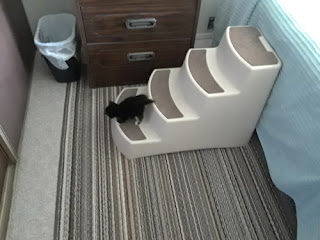 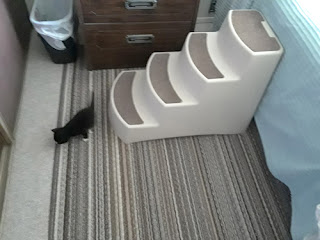 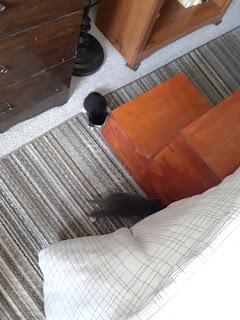 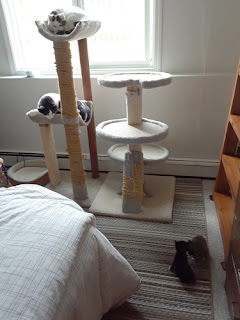 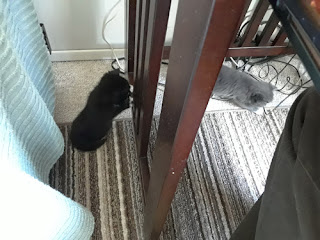 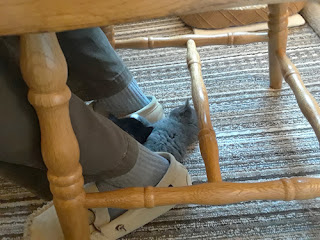