The Felons continue to explore and expand their world. Last night, they discovered the outdoors.

Well, the scent of the outdoors, anyway. I opened the bedroom window a small amount. It was quite cold out, and, generally, I open the window a bit at bedtime for the fresh air while I sleep, but not always before. The kittens were exploring the upper reaches of the bedroom cat-trees, to which they can now climb. They did not react immediately when I opened the window, but then they caught the smells coming in and the hunt was on for the source. Oleo found it first.

They had been but two or three weeks old when they last sniffed the outdoors and, to judge by the sounds they made being transported through it in a carrier to my apartment building, they didn’t much care for the wider world. But now, they are approaching their two-month age, and are ever so much more grown up than they were. The world may be frightening at times, but it is always an object of curiosity.

As well, Oleo and Bisto have graduated to an adult litter-box. It may be considered too big for them - after all, they have to lift a leg quite a bit in order to lift a leg in it, the door’s lip being several inches up - but that doesn’t bother them. When I first placed them in the library, they found the litter-box there and left their business in it. I started providing them with a smaller adult box, and they scrabble in and out without a complaint. This assists me since the new box is not only bigger, so there is less spillage, but hooded. Half the labour with kittens is cleaning up after them, and this is now reduced. Though the Felons are quite clean little thugs as it is, there is nonetheless a bit of relief in the new litter-box for me, as much as for the little criminals.

Onwards and upwards - literally - for the kittens. 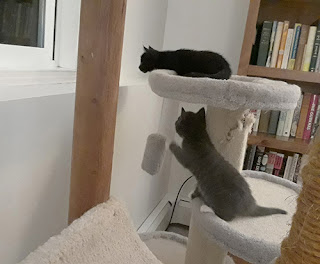 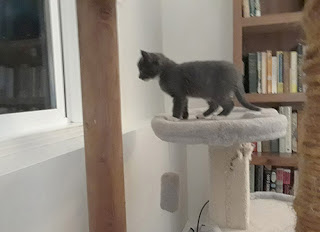 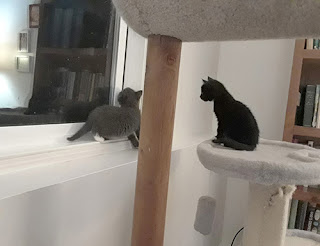