A Cat for All Seasons

Minuet is doing very well following her bout of diarrhea. In fact, she has entered into the spirit of spring. After at least a month of ignoring her cat-tree, she has taken to climbing it again, often lying down on a mid-level step that gives her a fine view through library door, or relaxing on the carpetted top of the bookcase under the window, where she can see outside. 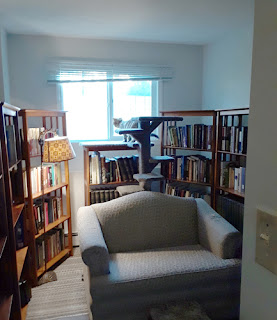 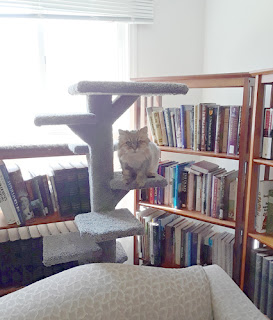 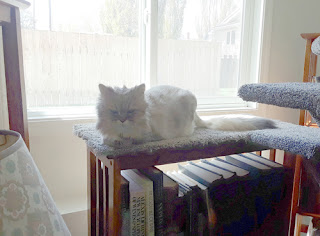 Min also spends less time in her little corner, less time on her heated blanket. She uses Tucker’s Tuffet to step up onto the library couch to snooze there; indeed, she spent last night on the couch. She even kept me company through the movie last evening. I like that because I can pet her without having to compact myself into her corner to spend time with her. Instead, she lie near me for an hour and a half, sometimes sleeping, sometimes wanting her peach-fuzz fur stroked. 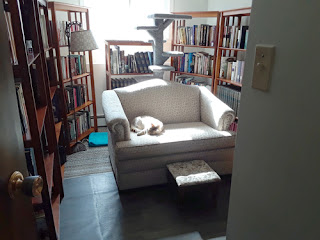 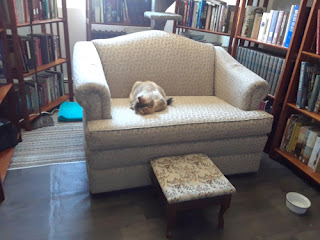 She has even ventured out of the library all together more. I just missed taking a photograph of her in the sitting room with the three boys. I was able to get a couple of her leaving, after giving Hector what-for. 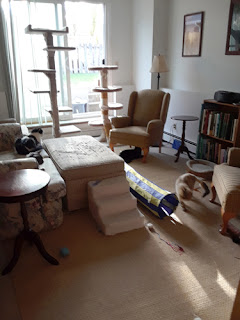 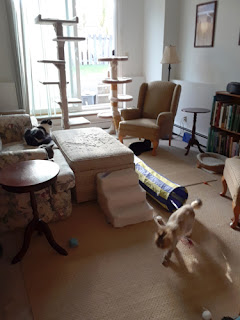 This change may be due to the progress of the seasons. Though the spring here has been rather cool, it is noticeable, and, in the past, I have seen my cats alter their behaviour with the months, even if we humans can’t perceive much difference in the weather. Then again, a friend wondered if the prescription of anti-biotics Madame received recently helped clear up something other than her more obvious diarrhea-causing infection.

Nonetheless, as she came to me in the depths of winter, it will be interesting to see how she reacts to the seasons as they come and go, and whether or not Minuet continues her new behaviour, she seems to be enjoying the wider parameters offered by the spring.