No Breakfast for Renn

My big boy, Renn, is at the hospital right now, having a tooth removed. I informed the doctor that I would like to have removed any of Renn’s teeth that look like they may give trouble in the future. At fifteen, and with second-stage kidney failure, I don’t want him undergoing any more medical procedures. He was started on fluids as soon as he was admitted, and will be on them for a couple of hours before his operation, and then all afternoon, until I pick him up about 4.30. 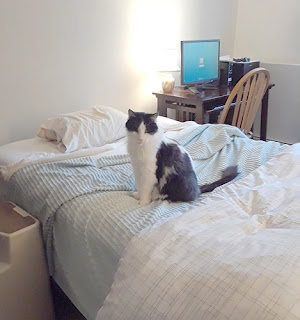 I felt very bad for Renn this morning. He doesn’t wish for breakfast every day, but he was ready and eager for it today - and I had to deny him the food that he wanted. The picture above depicts him waiting for service (which he gets before I make my bed); today he had to do without.

But the mornings when he has little appetite are also mornings in which he feels off, and sometimes throws up. Kidney issues often produce a morning illness. His alert attitude today boded well for his surgery; I wouldn’t want him going under anaesthetic while feeling poorly.

I am worried about my big boy, but he is in capable hands. The doctor with whom I am most familiar at the veterinary hospital - and, more importantly, who is most familiar with my cats - is performing the surgery. I will be called when all is done, and will bring my friend home soon afterward. 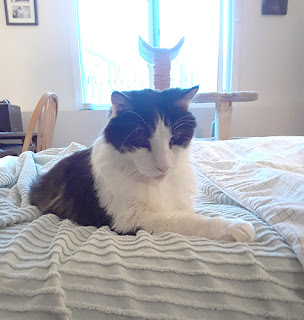